A volunteer helping park officials prevent a herd of wild elephants from invading a village in Kanchanaburi’s Thong Pha Phum district on Sunday evening was fatally kicked by a panicked elephant cow with child.

Thammasilp Ratananuphappoj, 54, a resident of Ban Pha An in Tambon Tha Khanoon, was pronounced dead at Thong Pha Phum Hospital.

Thong Pha Phum National Park officials told police they and local people were trying to block about 30 elephants from entering the village.

They said a female elephant with an infant became frightened and rushed at Thammasil, kicking him once, hard enough to hurl him five metres.

The elephants were herded back into the forest and the injured man was taken to hospital, too late to save him.
The Nation 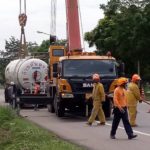