A Kanchanaburi man has been arrested for disguising himself as a Singaporean man to deceive people into handing over some Bt25 million in exchange for beautiful crayfish that never arrived.

Pol Colonel Thongchai Yuket, commander of the Crime Suppression Sub-division 1, on Thursday announced the arrest of Apirak Thavorncharoensuk, 42, a Kanchanaburi resident. The warrant for Apirak’s arrest was issued by the Nonthaburi Court on December 27, with another warrant issued by the Ayutthaya Court on April 10.

Thongchai said Apirak posed online as a Singaporean man, with his website hosting photos of exceptionally beautiful crayfish that he claimed to be able to import for buyers. He attracted many victims, from whom he demanded guaranteed payment before failing to deliver the crayfish.

He was arrested in Kanchanaburi.

Magic doll no use to woman charged with drug peddling 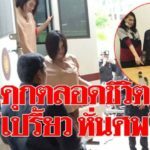