The Pattaya motorcycle taxi rider faces more serious sanction from the Department of Land Transport than he got from the police.
Sunthorn Saengtham was caught on video kicking German Andreas Bauer in the face after a traffic stop outside the police station on beach road.
But the Thai was fined just 500 baht by the cops for the assault.
In a latest development yesterday DLT chief Sanit Phromwong said he would face thousands in fines – and he could even go to jail.
Sanit said that Sunthorn had no licence to operate a motorcycle taxi, was using a private unregistered vehicle for the purpose and besides was inappropriately dressed.
He will have to pay up to 4,000 in fines for these offences and could even be jailed for a month for operating a “win” service without a licence.
Sanit said that Sunthorn had let Thailand down and made the country look awful. He will go through the courts and be punished to the fullest extent of the law.
He told motorcycle taxi riders in Pattaya and elsewhere – no more rip-offs, no more fighting and no more bad behaviour – or else.
He also commented on the rank at “View Talay Condo 6” who want to enlarge operations. This is under consideration but if riders take matters into their own hands and fail to follow the law they face having their licences removed. 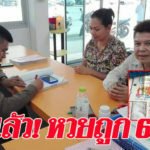 Kuwaiti hit over the head with a snooker cue!