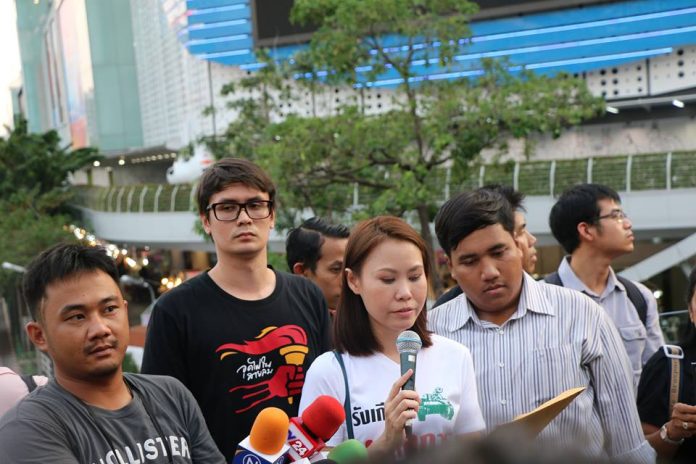 Junta orders 7 activists to be charged

The junta has ordered seven of the most prominent pro-democracy activists charged with crimes including sedition after they launched a protest campaign calling for general elections to be held in November.

He said that he has solid recorded evidence that the seven protest leaders have violated the junta’s ban on political gatherings of more than four and committed acts of incitement against the state.

“We collected their deeds in detail,” Burin said, referring to a protest held Saturday on the Skywalk at Pathumwan Intersection.

Several hundred protesters showed that day. Burin, who said he acted on the orders of the National Council for Peace and Order, the formal name of the military junta, said the seven were singled out because they are leaders and committed sedition.

Nutta, one of the leaders, said she will not back down despite the possible charges against her.

“It came sooner than I thought,” Nutta said.

“The fire has been lit,” Nutta said, referring to Saturday’s higher-than-usual turnout of protesters and growing anger over possible deferment of elections from November to February 2019. The junta-appointed National Legislative Assembly voted Thursday to delay the implementation of necessary elections laws by 90 days.

Nutta said prosecution of the junta’s highest-profile opponents was a clear attempt to be rid of its critics.

“They want to snuff the fire at its source because everyone’s getting energized. The people have become lively again, and even the media reported it on the front page in a sympathetic manner,” Nutta said Tuesday, minutes after learning about the charges.

Asked if she will now back down, she said she would have done that long ago were she cowed by the junta.

“How can the junta’s orders be above the constitution?” she said, adding that plans for ongoing protests and the junta are now on a collision course. The next protest is scheduled for Feb. 10 at the Democracy Monument.

Burin defended the ban on political gatherings as being in line with the 2017 Constitution, however.

“They have all the rights under the constitution,” he said. “But those rights must be in line with the laws. Don’t just cherry-pick.”

Another activist on the list of being the accused, Sirawith Seritiwat, or Ja New, also sees an attempt to stop a growing protest energized by anger over the election delay.

“If we are afraid of the illegitimate power of the NCPO, then there will be no hope in fighting. We must adhere to the principle that junta’s order is not a law. I will continue to fight no matter what. We are sending a signal to the junta.”

On Monday, an aide to junta deputy Prawit Wongsuwan, said the pro-democracy campaign was orchestrated by foreign powers. Paisal Puechmongkol said on his self-maintained fan page that they the result of “trickery by foreign powers” as in Iran and Hong Kong. He posted his comments along with a photo of an actor portraying an ancient Chinese military strategist. 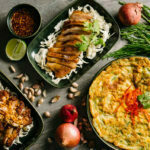 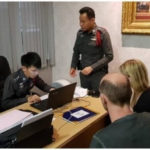