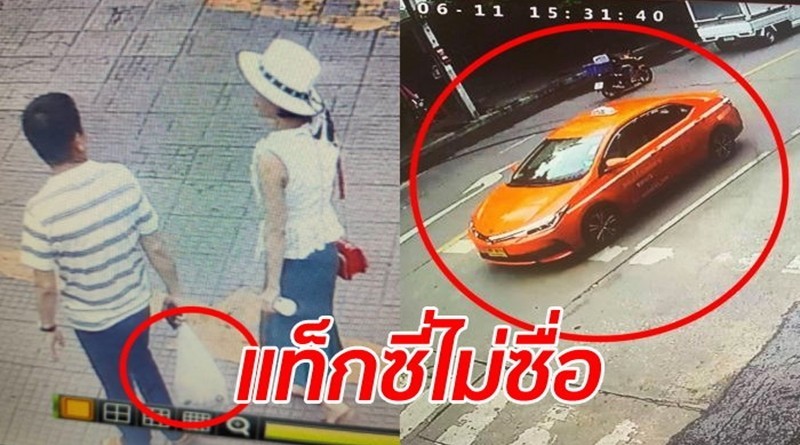 A Chinese man forgot 2.8 million THB on a taxi, after receiving most of the money back thanks to the help of JS100 and other good citizens involved in the search, the owner of the money wishes to not press any charges against the taxi driver in the incident.

An employee of the Twin Tower Hotel reported that there was a Chinese man who forgot a plastic bag full of cash inside a taxi on the 11th of this month. Inside the 7/11 plastic bag was a dark purse with 90,000 USD or about 2.8 Million THB of cash in it. The money was to be used for payment in buying a condo room.

The employee stated that the man called a taxi, the man had already gone to sit in the front seat when the taxi driver refused service. The man then exited the taxi, forgetting the plastic bag behind. The security camera from the hotel captured the color of the taxi which was orange, but the license plate was too far from the camera because the man had crossed the road to call a taxi.

JS100 the discovered security footage from a nearby company close to the Twin Tower Hotel and discovered the footage of a taxi that ran their camera at the same time. The license plate was finally known. After contacting the Department of Land Transport, JS100 received information that the taxi belonged to a taxi rental company.

JS100 contacted the owner of such company and received information that the driver is named Weerapong. Weerapong admitted that he picked up 2 Chinese, but he didn’t see what they were carrying and that he didn’t deliver them to the destination because he had to return the taxi to the rental company.

Weerapong then went to pick up a group of 3 women to Pinklao Road. He stated that 2 sat in the back and 1 sat in the front seat. When they arrived at Pinklao, he doesn’t remember if they were carrying anything with them as they exited the taxi. JS100 sent this information to the Pathumwan Police.

The Pathumwan Police contacted JS100 on the 15th of this month and reported that they have discovered footage showing the taxi driver carrying a similar bag that the Chinese man was carrying in the footage from the hotel. Weerapong then went inside his home for 49 minutes before coming out with no bag. He then returned the taxi to the rental company and didn’t report of such bag to the owner of the taxi rental company. The police went to his home and discovered that the place was cleared out.

The police put out a search for Weerapong and found him walking in a convenience store. He told the police that he had moved and that he took the bag of cash then gave it to his brother in Ratchaburi Province. His brother told the police that the money was still with him. The police received the bag on the next day, at the same time the Chinese man had fallen ill and was in a hospital.

Then on the 18th at 6.30pm, JS100 reported that the police had returned the money to the owner. Police Lieutenant Chindanai Wilawan reported that the Chinese man had come with 6 other friends. Together they gathered 90,000 USD, each putting in 15,000THB to start a beauty business. The first step was to buy a condo in Pattaya together along with proof of the purchase documents.

Weerapong had used 1,100 USD or about 35,000 THB. The Chinese man received 88,900 USD or 2.77 Million THB back. The Chinese man does not want to press any charges against Weerapong and is extremely thankful for all the good citizens and the officers that investigated and helped return the money to him.