One of Jeffrey Epstein’s former sex slaves claimed the pedophile asked her to be a surrogate when she was just 18, around the same time he said she was too old for his sexual perversions.

Virginia Giuffre née Roberts told The Mail on Sunday in 2011 and then later stated in an interview with the FBI that it was Epstein and Ghislaine Maxwell who informed her of this plan.

‘They said I would have to sign a contract relinquishing rights to the child and consenting to Jeffrey having as many relationships as he liked,’ said Roberts, who was told she would get a mansion in exchange for her services.

A short while later she managed to escape, after being sent to Thailand for her 19th birthday to take a massage course – and told she would be taking back an underage girl.

Maxwell has long denied Roberts’ claims but did settle a defamation lawsuit that was filed against her by the former Epstein victim last year for an undisclosed amount.

It was just announced last month that 2000 sealed documents from that case would be released after being put under seal.

Roberts was to interview the minor with the goal of taking her back to the United States, but that all changed when she met her now-husband.

She never returned and the two went off to start a new life in Australia, where they are now raising their three children.

She has since devoted her time to combating sex trafficking and the sexual abuse of minors.

‘In 2011, two FBI agents located Giuffre in Australia—where she had been hiding from Epstein and Maxwell for several years—and arranged to meet with her at the U.S. Consulate in Sidney,’ read a suit filed by Roberts that detailed how she came to speak out.

‘Giuffre provided truthful and accurate information to the FBI about Epstein and Maxwell’s sexual abuse.’

It was Roberts who reopened the FBI’s probe into Epstein when she provided agents with photos of herself traveling the world with the pedophile.

‘Epstein took me on a ferry boat on one of the trips to New York City and there he took the picture above. I was approximately 15 or 16 years old at the time,’ she writes of one photo.

In that picture, Roberts looks years younger than her age as she smiles for the camera while on an unchaperoned trip with Epstein and Maxwell over 1,000 miles away from home.

‘You can see how young I looked in the photograph,’ she notes, while also revealing she was raped by Epstein at his Manhattan mansion on that trip.

‘Over the next few weeks, Jeffrey Epstein and Ghislaine Maxwell trained me to do what they wanted, including sexual activities and the use of sexual toys,’ she wrote.

‘The training was in New York and Florida, at Epstein’s mansions. It was basically every day and was like going to school. I also had to have sex with Epstein many times.’

Roberts said that she was trained to be ‘everything a man wanted me to be.’

The photos that were used by Roberts make it clear that she was with Epstein at some of his properties, most notably his ranch in New Mexico.

‘The first one is a museum in Santa Fe, New Mexico. We had gone sightseeing for the day. Epstein took this picture of me. I was approximately 17 at the time, judging from the looks of it,’ write Roberts.

‘At the end of the day we returned to Epstein’s Zorro Ranch. The second picture is me on one of Epstein’s horses on the ranch in New Mexico. The following two are from wintertime in New Mexico.’

Roberts and another underage victim are suing the government for the sweetheart plea deal they offered Epstein, and for failing to provide the plaintiffs and other victims with any concrete information about the sex offender.

In her case, Roberts did in fact get a letter from the FBI, but not until long after the plea deal had negotiated and Epstein’s non-prosecution deal and signed.

That letter is attached as an exhibit in one filing and shows it was mailed in September, more than two months after Epstein signed off on the deal in June.

Roberts, who was the first and remains one of the few Epstein victims who has gone public with her allegations, recounted how she found herself being shuttled around the world and raped by men three times her age in court papers.

‘Epstein had promised me a lot, and I knew if I left I would be in big trouble. I also knew that I was a witness to a lot of illegal and very bad behavior by Epstein and his friends,’ stated one filing.

‘If I left Epstein, he knew all kinds of powerful people. He could have had me killed or abducted, and I always knew he was capable of that if I did not obey him. He let me know that he knew many people in high places. Speaking about himself, he said ‘I can get away’ with things. I was very scared, particularly since I was a teenager.’

And she was not the only one who was scared she claims in court documents.

‘When I was with him, Epstein had sex with underage girls on a daily basis. His interest in this kind of sex was obvious to the people around him,’ noted Roberts.

‘The activities were so obvious and bold that anyone spending any significant time at one of Epstein’s residences would have clearly been aware of what was going on.’

Roberts in the past claimed in US court papers that she slept with Prince Andrew, a former friend of Epstein – however, he has always denied any involvement and the allegations were later struck from the record as being ‘immaterial and impertinent’. 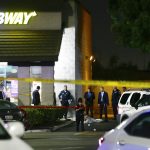