A jealous husband stabbed his co-worker repeatedly with a kitchen knife on Monday, claiming the victim had got too friendly with his wife.

Phatthalung police were called to the bloody scene outside an electrical appliance shop in the southern province’s Muang district on Monday morning.

They found Natthawut Mutsri, 45, a member of staff at the shop, bleeding profusely from several knife wounds. He was rushed to Phatthalung Hospital for life-saving treatment.

The perpetrator, Prapat Nadam, 36, later surrendered to police. Prapat had worked at the same electrical appliance shop as the victim.

Police said he confessed to attacking Natthawut out of jealousy after the victim tried to befriend his wife who also worked at the shop.

According to other shop staff, Prapat had appeared at the shop with the knife and suddenly launched the attack on Natthawut. 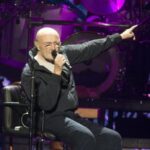 Phil Collins confirms next Genesis tour will be his last