Home » From Jack the Ripper to Ted Bundy, why are dead women’s bodies still being used as entertainment?

We are all familiar with what the police officer sees when he enters the room; we have seen it more times than we care to recall – on TV, in films, in graphic novels, we have heard it described on podcasts.

The place looks like an abattoir, but it is a woman’s bedroom. Blood is splashed on the walls and seeping into the drenched mattress. The room’s inhabitant, a sex worker known as Mary Jane Kelly, is lying prone, her body partially dismembered. Somehow, when the photographer arrives to take this now infamous picture, she still manages to appear coquettish. Her legs are splayed; her head is tipped ever-so-come-hithery to the side.

More than any of the other five canonical victims of Jack the Ripper, it is Kelly who has become the poster girl for these crimes. At 25, she was the youngest of the five women murdered between August and November 1888. Kelly, described as being attractive and overtly sexual (on account of her profession), is regarded as the most “popular” among Ripperologists – people (mostly men) for whom investigating the unsolved murders is a hobby. Kelly also happens to be the one most heinously murdered by the killer. Although we know the least about Kelly, the sickening image of her corpse, alongside the equally disturbing photos of the other four victims, continues to drum up interest.

The ENO production of Jack The Ripper: The Women of Whitechapel, which focuses on the women’s lives rather than their violent deaths.

Using the latest technology, Jack the Ripper – The Case Reopened promises viewers new insights into how the Ripper went about killing mothers, daughters, sisters, wives and friends. The programme’s description on the BBC website invites audiences to “understand the extraordinary risks the Ripper took to kill his victims” as it places the women on a “virtual reality dissection table”.

For more than 130 years, Mary Ann “Polly” Nichols, Annie Chapman, Elizabeth Stride, Catherine Eddowes and Mary Jane Kelly have had their bodies stripped naked, violated, prodded, examined and dehumanised with shocking regularity. Entire libraries have been written about their deaths, their eviscerated figures adorn T-shirts and stickers, you can even visit a museum dedicated to murders and pose for photos with their corpses. Along with Downton Abbey, Henry VIII and Sherlock Holmes, Jack the Ripper is one of our country’s most recognisable cultural exports. What we have done to them is the grossest example of our drive to use women’s brutalised bodies as a flimsy springboard to tell a story about a male killer.

Television is awash with true crime, and much of it revolves around serial killers. BBC Four’s The Yorkshire Ripper Files, instead of retelling the story of the man who bashed in his victim’s heads, focused on the systemic misogyny that infected the police investigation and the press coverage. The director Liza Williams’ approach felt like a brief but refreshing gasp of air in the wake of Netflix’s Conversations With a Killer: The Ted Bundy Tapes, a series that is soon to be followed by a Hollywood version of Bundy’s life; Extremely Wicked, Shockingly Evil and Vile. In it, the killer, rapist and necrophile is played by pretty teen-heart-throb Zac Efron, a seductive casting choice that has already unnerved many.

Later on in the year, we also can look forward to two films about Charles Manson, Quentin Tarantino’s Once Upon a Time in Hollywood and Charlie Says – in which Matt Smith plays the killer. While the latter of these films claims to focus on the women who did Manson’s bidding, it’s difficult to imagine that either will exclude a reference, visual or otherwise, to the violent murder of the heavily pregnant Sharon Tate and her unborn child.

At the end of the day, audiences who tune in, stream or buy their tickets to these bloody spectacles do so because they want to gawp at the men who turned women into corpses.

The brutalised and raped bodies of women have become an essential component of most crime dramas. During season five of Luther, screened earlier this year, fans took to social media to complain about the body count. The opening episode saw a woman brutally murdered by a killer clown while riding on the top deck of a London night bus, while in another episode, a serial killer dispatched a woman trying to buy a secondhand fridge. In the past, similar complaints have been heard about series such as The Killing, The Fall and Top of Lake, causing the actor Doon Mackichan to speak out against the “crime porn” that afflicts her industry. In 2017, she, along with three other actors, rather optimistically called for “a year without rape, violence, dead women on slabs” in a letter to this newspaper. Sadly, I’m not convinced this is likely to happen in the near future.

There are, however, moves afoot to reconsider how murder is approached, depicted and discussed in popular culture.

Among the remedies proposed is Bridget Lawless’s Staunch book prize, which was launched last year. Lawless, an author and screenwriter, wanted to encourage crime writing that didn’t feature women being “beaten, stalked, sexually exploited, raped or murdered”. Although noble in sentiment, not everyone was taken with the idea, including the crime novelist Val McDermid, who believes that as long as “acts of misogyny and violence against women are being committed, they need to be written about, and not swept under the carpet”. However, McDermid was also quick to condemn unnecessary gratuitous violence, and entertainment that gloried in “a kind of pornography of violence”.

Phoebe Waller-Bridge, with the series Killing Eve, may have found something like a compromise between Lawless’s prohibition and McDermid’s insistence that violence has an important role in storytelling. Villanelle, the anti heroine, is a ruthless, blood-lusty assassin, who revels in the act of murder. Waller-Bridge recently commented that she felt there was something “refreshing and oddly empowering” about seeing violent women in dramas. I’m not entirely won over by this solution, although it certainly makes a change from seeing them lying dead on a slab. Remorseless, angry, brutal, deadly violence is violence, no matter who is committing it.

Perhaps the problem is that we have just become too comfortable with images of violence, whether visual or descriptive, that populate our screens and literature – from the trial of OJ Simpson to the Black Dahlia. If we see it enough times, we cease to feel it.

About three years ago, when I began researching my book The Five, in which I recount the life stories of the five women killed by Jack the Ripper, I was haunted by the pictures of the victims. Mary Jane Kelly’s in particular kept me awake at night, but as the months and years passed and I became completely immersed in the material, the gut-churning sickness began to diminish and I came to regard the coroner’s reports and photos with a hardened eye and a protected heart. I made the decision to exclude these gruesome details in my book for this very reason. Not only do they deserve to be reclaimed from the “pornography of violence” into which their identities have been sunk, but we have seen enough of their torn-apart bodies, and I certainly didn’t want to participate in anaesthetising the world any further to the sight of them.

I struggle to see how violence in any form, whether it’s against women or men, is entertainment. Nor do I find the prospect of watching a 130-year-old murder case reopened simply to try out some modern technology on the bodies of some of the most defiled, defamed and dehumanised women in history a nice way of spending the evening. No amount of 21st-century sleuthing will ever solve the Ripper murders, a series of crimes where the majority of the documentation is missing or unreliable to begin with. Recently, Hamish Campbell, the detective leading the murder inquiry into the killing of Jill Dando, a professional with all the contemporary resources available to him, admitted that the case will never be solved. The hunt for these killers will only ever be a parlour game played for our own entertainment and at the victims’ expense. We owe it to them to finally call it a day. 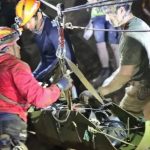