Home » ISIS take 700 hostages and are executing 10 EVERY DAY 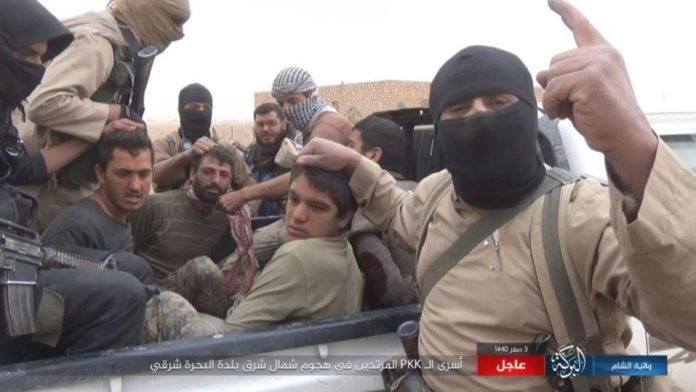 ISIS has taken nearly 700 people hostage including several European and US Nationals in Syria and has vowed to kill 10 a day, Vladimir Putin has claimed.

The jihadi group is holding their prisoners captive somewhere south of the Euphrates River in the war torn nation.

Speaking in the Black Sea resort city of Sochi, Putin added that ISIS  was expanding its control in territory controlled by US and US-backed forces and blasted America for a “catastrophic” failure.

This is just horrible, it is a catastrophe.

“Some US and European citizens are among the hostages.”

He did not specify what the terrorists’ demands were.

Russia’s TASS news agency reported on Wednesday that ISIS militants had taken around 700 hostages in Syria’s Deir al-Zor province after attacking a refugee camp in an area controlled by US-backed forces on October 13.

Putin added: “Everyone is silent as if nothing has happened.”

He claims US forces looked away during the attack but pictures seem to show fighter jets in the sky overhead during the assault.

Although the figure of 700 hostages has not been independently verified, images have emerged appearing to show a militant attack in the region.

Pictures show fighters performing ISIS’ signature one-fingered salute as they grab the hair of their victims.

TASS said the militants had kidnapped around 130 families and taken them to the city of Hajin.

Women and children are believed to be among the captured civilians, according to the Syrian Observatory for Human Rights.

The area has been under attack by the US-led coalition and Syrian Democratic Forces (SDF) for the last month.

But the offensive has been met with heavy resistance from around 5,000 ISIS fighters.

A string of towns along the eastern banks of the Euphrates are some of the last areas controlled by the militants in either Syria or Iraq.

Since the offensive began on September 11, around 7,000 civilians from ISIS-controlled territory have fled to SDF areas, according to the UN – most from Hajin and Al Baghouz.

ISIS had appeared to be no longer a serious threat in the region with several Western governments suggesting the group had nearly been destroyed.

But this development appears to show the Islamist death cult is still a very real threat in the region.

An estimated 5,000 ISIS fighters are bunkered down in Hajin, with nowhere else to run.

And the US military believes many top ISIS leaders have fled there.

The group’s founder, Abu Bakr al-Baghdadi, was also rumoured to be in the area at one point.

Thai Airways ‘sorry’ for dumping passengers out of First Class