Home » Iranian tourists attack in Pattaya by his brother

Iranian tourists attack in Pattaya by his brother

Police rushed to beach road Pattaya yesterday after a large crowd gathered looking at an unconscious middle eastern man sprawled in the street. It looked like someone had drugged him and perhaps robbed him.

But when police arrived they found a different story.
The man was battered and bruised and was indeed spark out but his documents, credit card, and iPhone were all in his bag. Smelling salts – ammonia in fact – were administered as the concerned crowd looked on.

The man came round and said that his name was Ali. He remembered he was 29 and came from Iran. He had had an argument with his elder brother who had just left him there. He admitted he was just plain drunk after a big session and had had a fight with his sibling.

Witnesses confirmed a man had been with him but had left him to go to an ATM. Ali asked the cops to take him back to his hotel and they kindly obliged. Source: Bangkok Jack 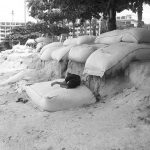