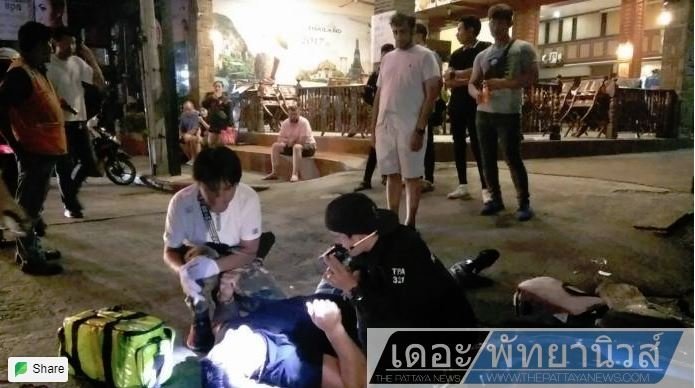 Intoxicated Russian: A drunk Russian tourist tried to flee the scene of an accident in the area of Walking Street at the end of Soi Diamond on Second Road in the early hours of Friday morning, November 16th, 2018.

Kolarov Aleksey Petrov, 36, was behind the wheel of a black Nissan  when Lt-Col Attarot Krongrat of the Pattaya police arrived on the scene.
He initially refused to get out of his vehicle and refused to speak to the police. A translator was brought to the scene who managed to calm down Mr. Petrov and get him to step out of his vehicle.
Witnesses at the scene stated that Mr. Petrov appeared to be very drunk and could barely walk or speak. He was tested by police at the scene of the accident.  Police stated he was over the legal limit but did not state the exact amount.
Mr. Petrov had hit another foreigner who was on a Honda Click motorcycle. Witnesses said that the bike was parked at the time and the other foreigner, who was not identified, had been sitting on their motorbike talking to a friend when Mr. Petrov hit him.
The rider of the bike was found with head trauma in the middle of the road after being thrown a fair distance and was treated by Sawang Boriboon medics at the scene.
The incident happened  around 5am. Mr. Petrov had tried to drive away but was stopped from doing so by members of the public at the scene, including local taxi motorbike drivers who blocked him from driving away.
Mr. Petrov was arrested and taken to the police station to face charges.

Russian Tourist arrested, alleged to have sent pics of his genitals to a ten year old girl