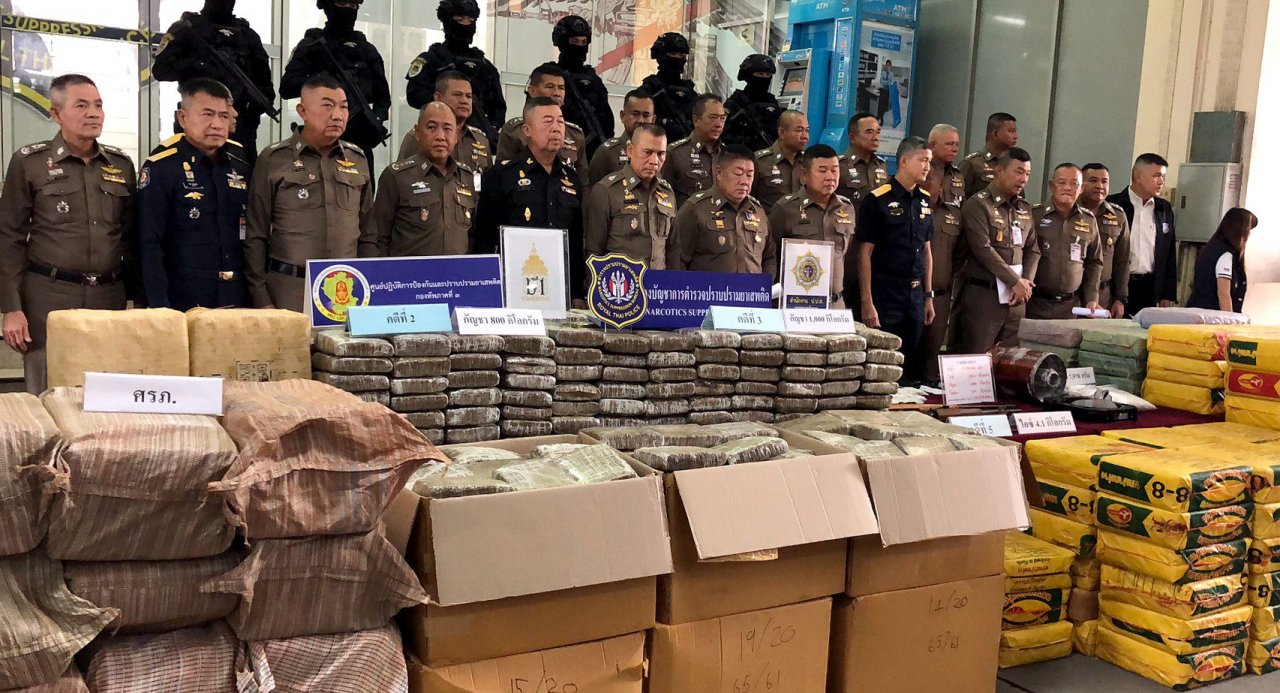 The forces had arrested 14, including a Nigerian man, and seized a big haul of illicit drugs between October 10 and 14, said Narcotics Suppression Bureau (NSB) acting chief Pol Lt-General Chinapat Sarasin. Drug traffickers wished to use the long holiday period to transport the drugs, but were outmanoeuvred by integrated police intelligence which prevented and intercepted drug smuggling through border provinces.

In the first case in Chiang Rai’s Chiang Khong district, three local men in their 30s were nabbed on the night of October 13 and 30 sacks containing 12.2 million meth pills and two sacks containing 100 kilograms of “ice” were seized. Withoon Piyapipattrakul, 35 and Wittaya Wongboonchailert, 32, were arrested along with the drugs on a pickup truck bound for Bangkok. A third man implicated as their accomplice Awichat Songsitthicharoe, 33, was arrested at a house in the same district.

In the second case, police arrested two Nakhon Phanom men – Watcharachai Pitisonthiyanont, 40, and his older relative Pakhin Pitisonthiyanont, 55 – and seized 800 kilograms of dried marijuana in the afternoon of October 11 in Nakhon Ratchasima’s Dan Khun Thod district. The pair reportedly confessed to transporting the drugs on the order of a Thai man named Chan or Aun in exchange for a Bt30,000 payment each from Sakhon Nakhon to Ayutthaya, police said.

In the third case, four suspects – two males and two females – were arrested on October 13 evening, and 1,000 kilograms of marijuana and two pickups seized in Lop Buri’s Chai Badan district, as they were transporting the drugs to the South in exchange for Bt30,000-Bt50,000 payment for each truck.

In the fourth case, a 40-year-old Thai woman Nujaree Arunpee and Nigerian man Gedeon Ndububa were arrested, and 7.97 kilograms of cocaine seized in a post package box at a mall’s parking lot in Bangkok’s Ramkhamhaeng area on October 13 as Nujaree allegedly delivered the box to Ndububa.

In the fifth case, a 23-year-old man Patipat Kwanthong was arrested, and 4.1 kilograms of “ice” seized in Songkhla’s Hat Yai district on October 10 at 11pm following the arrest of 31-year-old Waewta Pusawiro at her rented house as per an arrest warrant issued on October 3 by the Songkhla Court for drug charges.

In the sixth case, Kanchanaburi man Mano Selakun, 47, who was wanted for the charge of drug possession with intent to sell in an arrest warrant issued in 2016, was arrested at the border checkpoint in Tambon Ban Kao in Muang Kanchanaburi on October 11 while he tried to cross the border into Myanmar.

His assets worth Bt5.4 million, including a sedan, a pickup truck, a tractor, three pistols, one shotgun, a rifle, two land title deeds covering 8 rai of land, seven cows, and bank accounts were seized for police inspection to discover if the gains were ill-gotten. This arrest linked to the June 26, 2016 arrest of drug suspect Samart Yangsung, 31, along with 20,000 meth pills in Sangkha Buri district, in which Samart implicated Mano as his hirer to collect and transport the drugs.

Find our son’s killer or else, say parents