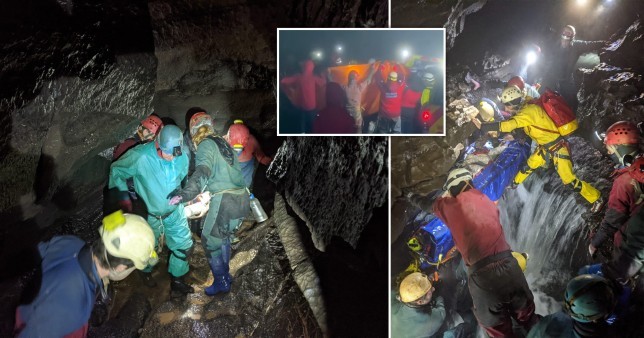 A man in his 40s has been rescued from one of the UK’s deepest caves after spending more than two days trapped inside.

The caver, who suffered a suspected broken jaw, leg, and spinal injuries, was brought out of a site in the Brecon Beacons in Wales at around 7.45pm.

The rescue mission involved more than 240 people from ‘most rescue teams in Britain’.

They worked together by inching him nearly two miles to safety on a stretcher with an oxygen mask on.

Described as an experienced caver, the man had been trapped since Saturday at around 1pm after suffering a fall.

South and Mid Wales Cave Rescue Team spokesperson Peter Francis, 74, said: ‘This is the longest rescue we’ve ever done but we’re very pleased with the progress being made.

‘The caver was very unlucky here. He’s an experienced caver, a fit caver. And it was a matter of putting his foot in the wrong place.

‘He wasn’t in a dangerous part of the cave, it’s just something moved from under him.’

The man is believed to have fallen more than 50ft from an underground ledge in the Ogof Ffynnon Ddu cave system – the UK’s third longest – near Penwyllt, Powys.

He was crushed by a boulder, leaving him unable to get out.

Mr Francis added to Sky News: ‘To actually carry somebody in a stretcher, this is a 60 hour job. It’s unbelievable. 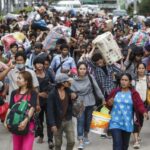