JS 100 Radio reported that the airport authorities prepared the plan after the airport’s security center was alerted through air traffic control center that the 9W066 flight that was scheduled to land in Bangkok at 8.37pm received a bomb threat. As a preliminary measure, the aircraft of the flight was taken to an isolated parking stand to the west of the airport and 153 passengers and eight crew were evacuated from the plane. They and their belongings were searched and Explosive Ordinance Disposal was called in to inspect the loaded luggage and then the aircraft. The search is still continuing at the press time.The JS100 Radio did not say how the airline received the threat.     Source: Nation News 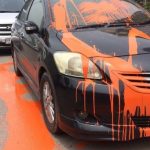