Police have arrested a Chinese man after a clip of showing a tour guide threatening Chinese tourists in Pattaya was shared on social media.
Tourist police chief Surachet Hakpal announced the arrest of Mr Li Hai who was filmed threatening the group of Chinese tourists in Pattaya after they failed to buy goods from a shop.
Mr Hai then demanded money from the group and when they refused he said they would not be allowed to use the bus again the next day.
The incident which occurred on the May 9th resulted in the group leaving Thailand and flying back to China the same day. Footage of the incident was then picked up by Chinese media with the clip eventually being viewed more than three million times.
The group had bought a tour to travel to Bangkok, Rayong, Pattaya and Chonburi from a Chinese-Thai tour company called TYT.
The clip resulted in many negative comments from people in China about tour guides in Thailand, with many people posting saying it was best to avoid the guides altogether.
Mr Hai has been charged with working as an illegal tour guide, while representatives of the TYT company face charges of damaging the image of tourism in Thailand. P1 – EP 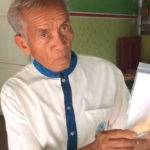