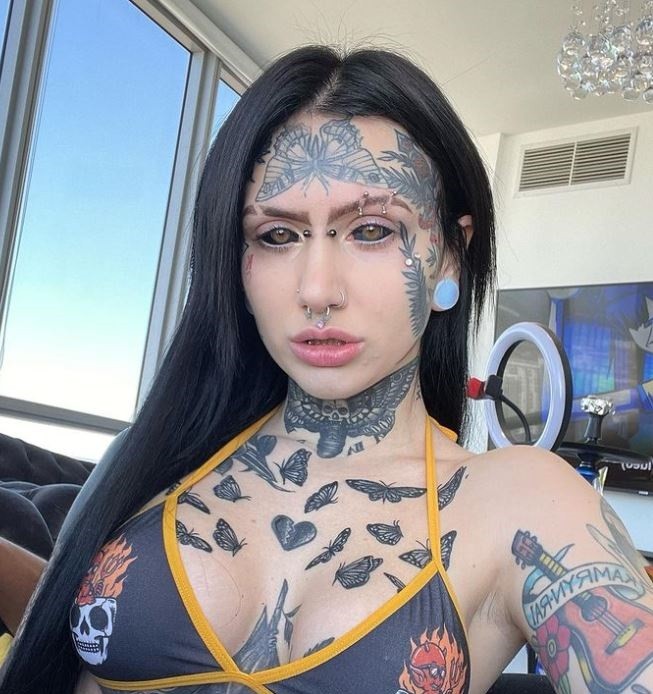 A HEAVILY-tattooed OnlyFans model and body mod obsessive has described how many people think she’s a demon because of how she looks, despite her Christian upbringing.

Orylan, 22, insists she lives a “fairly normal life” and had a loving upbringing, despite her extreme appearance.

The black-haired model from Houston, Texas wants to challenge prejudices people have about her as she opened up about extreme body modifications and tattoos.

As well as her many inkings, she has even had permanent injections into her eyeballs to dye them black.

She’s shared more than 500 videos and pictures with her eager followers, who subscribe for $10 (£7.39) a month and also works in strip clubs in the US.

Speaking on the Soft White Underbelly YouTube channel, Orylan insisted she had a fairly typical upbringing, and said her artwork is entirely the result of self-love.

She also said many people prejudge her and assume she had a traumatic childhood when they see her tattoos and body mods.

“I grew up with all my family,” she said. “Most people look at me and they believe I was abandoned, I don’t have any family, or I’m not loved or anything.

“My whole family has been in my life, Grandma, Papa, everybody’s still alive, thank God.”

Explaining how she had a “very supportive, very loving family,” she went on: “I grew up really Christian, so I do believe in God. People don’t think I do, I look like a demon to most people.

“I look like a vampire, demon, or whatever somebody would want to call me, but I grew up Christian.”

In fact, she confesses, the model lives a “fairly boring life” and has never taken hard drugs or been involved in an extreme lifestyle.

A picture from before Orylan had any body modifications or tattoos shows the extent to which she has transformed her appearance, as an unrecognisable blonde teen smiles out from her Instagram page, where she regularly posts pictures for her almost 18k followers.

All of her changes have come in the past couple of years, she says, following a “toxic relationship” with an abusive ex-boyfriend.

“He wanted my hair short and blonde, cut like that, he didn’t want me to have any tattoos,” she said.

Now, however, she is comfortable in her own skin, explaining: “I started loving myself so much after I did this. There was no self-love before, I really hated myself the way I used to look.

“I look like a vampire, demon, or whatever somebody would want to call me, but I grew up ChristianOrylanOnlyFans Model

“It’s pure self-love, there is no destruction in this at all. I did this because I love myself because it’s a part of me now.”

And Orylan insists she’s not done yet with altering her appearance.

“I’ll continue to get tattoos, I’m not done,” she said. “I’ll cover my whole body, I’m done with my face for sure, but I have many more to get.”

Under the YouTube video of her interview, which has already been viewed more than a third of a million times since being uploaded on Friday, the overwhelming majority of comments were positive.

“As a woman whose entire body is tattooed from throat to toes… I fully understand her when she said that she wants to look like a monster on the outside while that’s totally not who she is on the inside,” one commenter wrote.

“I hardened myself on the outside because of how incredibly soft I am on the inside. It became a kind of protection for my heart. A broken heart is the worst kind of pain.”

A second wrote: “Wow! I can honestly say that these videos have helped me to not judge a book by the cover. Her soul really shines bright and she was completely different from the preconceived notions I had about her.”

While a fourth said: “Looks aren’t everything and society is really conditioned to dislike anything that isn’t ‘normal’ which is heartbreaking.

“I have tons of tattoos, piercings, and I’m very tall for a woman and the attention can be good or bad so I understand part of where she’s coming from for sure.”

Last month, a tattoo artist admitted she was addicted to extreme body modification and was inking her entire body black.

As well as having her skin blackened, she also has so-called scarification – permanent markings made by cutting the skin – on her face and arm and has her tongue split, pointed ears, and tattooed eyes.

Explaining her decisions to change her body, she said: “I was kind of the normal, good-looking girl, the way it got to be like this is because I want to kind of erase that beauty.” 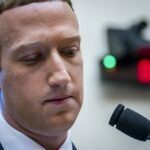