When police escorted a man accused of killing his wife by splashing and forcing her to drink acid to the local court, one of his neighbors showed up to vouch for his character.

“I really pity him. He’s a good man. He took care of his family, But he had to see an image that pierced his heart, of the one he loved sleeping with other men. That’s why he did it,” the unidentified neighbor said. “Otherwise, all of us neighbors would have cursed him when he came to do the crime reenactment yesterday.”

Chorlada Tarawan’s death Saturday has captured national headlines for its full-blend cocktail of horror. A woman was burned with and forced to drink soldering acid by her jealous husband, Kumtun Singnad. A young daughter’s desperate bid to save her mother’s life, only to be turned away from the emergency room. Her mother, out of time, dying after being shipped off to another hospital.

But instead of pity for the victim, her alleged attacker – police say he’s confessed – began feeling out the familiar rationalization of wounded men who harm women.

“I did it out of jealousy. I was jealous because I loved her,” Kumtun told reporters Monday.

Kumtun, 50, said that Chorlada had been having an affair with two other men since April, which led to frequent marital quarrels. Police Lt. Gen. Sutthiwong Wongpin said that he believed Kumtun had been planning to attack Chorlada since then, bought the soldering liquid from a fellow taxi driver and hid it in his room before pouring a “Coke can’s worth” of it onto her.

However, much like the neighbor, many other men weighed in – especially online – to justify Chorlada’s murder.

“If you never experienced seeing it yourself, you wouldn’t know how it feels. Finding your wife with another man, or your husband with another woman. I’d really like to know, how would you react?” Somsak Pananto wrote in a comment on a news story.

Facebook user Jonathan Livingstons found criticism of the confessed murder to be unfair:

“It’s strange that when women harm men, people cheer her for giving him what he deserves. But when men hurt women, everyone curses him. So why are you asking for gender equality?”

Police are investigating the full nature of what Kumtum did, and whether he just splashed Chorlada with acid or also forced her to drink it. One police investigator said the lawyer and victims’ rights advocate representing the family examined Chorlada’s body and found her digestive tract also ravaged by acid.

“This suggests that Kumtum lied about only splashing her face with it,” Lt. Col. Apirat Poomkumarn said.

Chorlada’s family is currently in mourning at her home in Khon Kaen province, where her coffin awaits a funeral set for tomorrow.

“I want to ask him why he had to kill my child. I can’t forgive him. It’s too much,”
Tong-ard Tarawan, Chorlada’s mother, said. She said she’d previously begged Kumtun to refrain from domestic violence.

“I asked them to love each other. He promised he wouldn’t harm her anymore. He even prostrated. Don’t fight, it makes me suffer too. Don’t kill, don’t hit her,” Tong-ard said she told him.

Still, the most reactions suggested people were not indulging Kumtun’s portrayal of himself as the aggrieved victim.

“You said you didn’t mean to? Then how did you get the acid? Did it fly into your hands magically from the air? You bastard! If she survived, she still would have to have lived with a disfigured, ghost-like face; it would be like being dead while alive,” wrote Paiboon Phichphimok. “I’m a man, but I hate it when men do this. I can’t find the the right words to yell at you. In conclusion: You’re an evil bastard!”

Yanesa Jaisangad wrote, “What is your heart made of? If she doesn’t love you, just break up with her. There’s so many people in the world. Why did you have to hurt her?”

“This loser couldn’t get a woman to love him. He had such low self-confidence and nothing good in him to keep anyone to stay with him. You old, ugly thing couldn’t take it if you got dumped, so you decided to hurt a woman instead?” Nisa Naksri wrote. 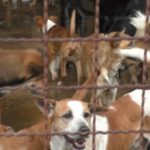 CITY HALL VOWS HUMANE ROUND UP OF STRAY DOGS