A sadistic husband arrested after his wife was found dead at their home in Phutthaisong district, naked and with bite marks on her face, has allegedly admitted he choked and suffocated her.

Nitiphot Klomthaisong, alais Dao, 52, was arrested while trying to flee to a relative’s house in Huai Thalaeng district of Nakhon Ratcasima on Monday night, and taken back to Buri Ram province.

Kamala Kongthaisong, 55, was found dead inside her house in tambon Phutthaisong on Sunday. She was naked with bite marks on her face and body.

Police believed she had been dead about two days, based on the condition of the body.

The victim had lived in the house with Mr Nitiphot for about 10 years. When police arrived there was no sign of the man. His saleng tricycle was also missing.

The dead woman’s stepmother, Dokmai Kaewthaisong, 70,  told police that Mr Nitiphot had often assaulted Kamala, and once poured hot water over her and she had to be admitted to hospital.

She had told Kamala several times to end her relationship with the man, but her stepdaughter remained living with him

Prapit Pruenthaisong, a neighbour, said local residents were well aware of the man’s bad conduct. He drank alcohol a lot and had sadistically abused his wife.

Investigators agreed Mr Nitiphot was their prime suspect in the murder. They examined security camera recordings and tracked his escape route. He was later arrested and allegedly admitted he killed Kamala.

On Tuesday about 30 police escorted Mr Nithiphot to the crime scene, where an angry crowd had gathered, for a re-enactment of the crime.

The suspect pointed at the spot where he said he killed her. He said he and his wife had been drinking  that day. They were drunk and quarrelled. He angrily accused her of using his money for herself.

They had sex and then he choked her and held a pillow over her face until she stopped moving.

The suspect was taken back to the police station for further questioning. No relatives showed up to visit him or offer to post bail. He was expected to appear in Buri Ram court on Wednesday.

Mrs Dokmai said she hoped the suspect would be harshly punished. 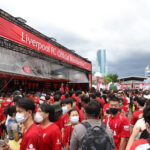 Crackdown on a major drug gang, seize assets worth about ฿100m