Human Rights Watch (HRW) has called for Thai authorities to immediately drop all charges and unconditionally release 14 pro-democracy activists who peacefully expressed their opposition to military rule.
The activists were arrested yesterday as they attempted to march to Government House to push for an early election. Prime Minister Prayut Chan-o-cha insisted that the poll will be no sooner than early 2019.
“The arrest of peaceful democracy activists calling for free and fair elections shows that Thailand’s military junta has no intention of easing its oppressive rule,” said Brad Adams, HRW Asia director, on Tuesday.
“Gagging peaceful public protests makes a mockery of Prime Minister General Prayut Chan-o-cha’s self-proclaimed commitment to return Thailand to democracy,” he added.
The protest leaders arrested were Anon Nampa, Chonthicha Jangrew, Nuttha Mahattana, Ekachai Hongkangwan, and Chokchai Paiboonrachata. Three others – Rangsiman Rome, Siriwaith Seritiwat and Piyarat Chongthep – also turned themselves in soon after. Six others were also arrested.
They were charged with sedition, which carries a maximum seven-year prison term, and violating the military junta’s ban on political gatherings of more than five people.
“With each new politically motivated arrest, Thailand’s path toward democracy is fading,” Adams said.
He called for governments around the world to press the junta to set a firm date for elections and allow people and political parties to organise and express their visions for the future of the country. BP – EP 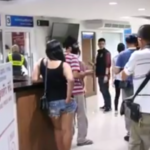