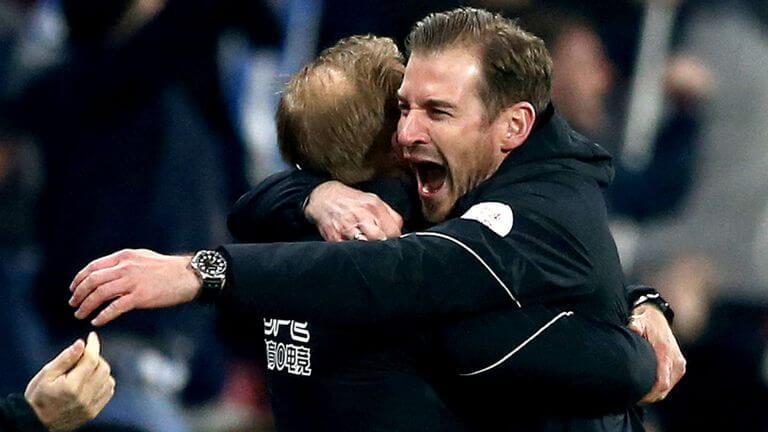 Huddersfield – Who Beat Wolves Back In November – Do it Again!

November 25th last year Huddersfield surprised many people by winning 2-0 at Molineux thanks to goals by Aaron Mooy.

After that, they went on a winless Premier League run that included one draw and 13 defeats. But Steve Mounie has now given home fans something to cheer about again after netting the winner against Wolves providing his team with an unexpected double.

Wolves wing back Matt Doherty, three Premier League goals this season and six assists, had a chance to open the scoring after 25 minutes after good work on the left by Diogo Jota. But with time and space, his first-time effort went well wide.

Huddersfield’s 24 year old striker Mounie, from Parakou, Benin, had a good chance to open the scoring on 57 minutes but his header went into the side netting. On 84 minutes he had a shot from the edge of the box that just went wide.

On 90+ 3 minutes, with the home fans about to celebrate a draw and only their second point since that win over Wolves in November Aaron Mooy sent over a speculative cross from the right. At the back post, Karlan Grant swung his boot but his shot was deflected. Mounie, on the ground inside the six-yard box, half raised himself and prodded the ball in the net with his left foot.

Huddersfield, for the first time since November 6th, had won a home game and that’s only the second home win of the season. The home fans, management, and players were quite excited about that.

It’s too late for Huddersfield to do anything about staying up but at least the people of Huddersfield had something to smile about at last.

Man of the match: Steve Mounie

Meet the AI monk: Buddhist robot costing £700,000 is now delivering religious teachings at a 400-year-old temple in the Japanese city of Kyoto

Robinson Crusoe island sets example for the world in conservation