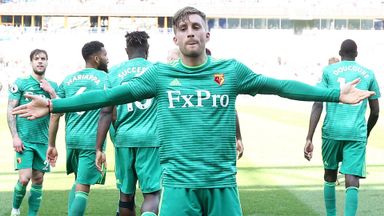 Born in Riudarenes, Spain, 25 year old Gerard Deulofeu began his career with Barcelona playing 68 games for the B side between 2011 and 2013. For the A team, with Lionel Messi, etc. he made two appearances before joining Everton on loan where he scored three goals in 25 games. Next up came a loan spell with Seville where he scored one goal in 17 games.

Everton went back in for him in July 2015 and this time they signed him for a reported fee of £4.2 million. Less than two years later, after not impressing with two goals in 37 appearances, Everton loaned him to A.C. Milan where he scored four goals in 17 appearances. At the end of June 2017, Barcelona activated his buy-back clause and he went on to score one goal in ten appearances.

Next up came a loan spell with Watford, one goal in seven games, and six months later he became a Watford player for a reported fee of £13 million. Discounting his Barcelona B early days he’s played 66 games on loan and 75 games as a real full-time signing.

This season Deulofeu has nine Premier League goals and five assists. He scored a hat-trick at Cardiff, as Watford won 5-0, and his first in the FA Cup Semi-Final goal will go down as one of the best seen at Wembley in a semi-final.

His first against Huddersfield came after only five minutes after Huddersfield lost the ball in midfield. As it broke to Deulofeu, on the left and just inside the box, he toyed with the defender in front of him before side-footing into the corner off the post. It was a touch of magic that totally bamboozled Huddersfield’s defence.

Karlan Grant, who joined Huddersfield in the January Transfer window, pulled one back in the 90+ 3rd minute but it was way too late.

Man of the match: Gerard Deulofeu

Songkran: Good Deed From The Police