Her arrest followed a complaint by Nikolay Lavanov, 37, a Russian national, that US$200 cash had been stolen from his room.

The young maid admitted she took the cash, saying the US$200 had been left twice on a desktop in the room. She did not intend to steal the money. She thought the foreign tourist had placed the money on the desk as a tip for her.

She then exchanged the money, receiving about B6,500, with which she purchased a small gold ring and kept the rest for personal use.

She was charged with theft. 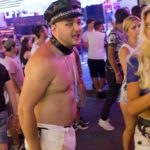 Who are the world’s worst tourists? Six nations that stand out – you may be surprised