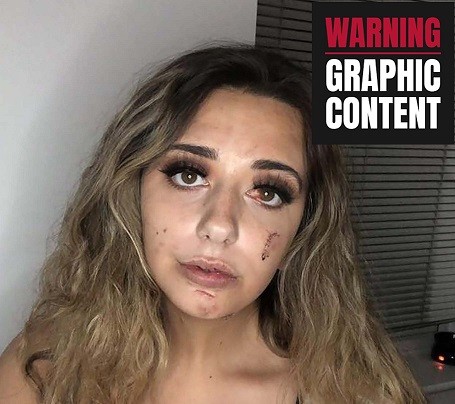 A WOMAN has revealed the horrific injuries given to her by a “scumbag” in an unprovoked attack at her local pub.

James Booth, 29, smashed a pint glass into Lucy Nobile’s face after she tried to stop him abusing a member of staff at the Hole in the Wall pub in Colchester, Essex.

The community volunteer, 20, was enjoying a night out with pals when the yob attacked her face and throat, wedging an 8in chunk of glass into her neck.

Devastated Lucy – who is partially sighted – suffered a torn cheek, separated lip, popped blood vessels in her eye and a chipped chin.

Glass was also driven into her nose and mouth, leaving blood pouring from her face.

“I was just chatting to a friend of mine and the next minute I had glass hanging out of my face,” Lucy said of the attack.

“He hit me with a glass but made sure he tipped it upside down so the heavy end connected.

“At first I didn’t know what was going on because of the adrenaline.

“It was only when I touched my face and I couldn’t reach my skin because of all the shards of glass that I knew something was wrong.

“After that I can’t remember much as I passed out due to blood loss and concussed myself by hitting my head off the floor.

“I had the length of the Fosters glass in my neck – it went in four inches.”

Violence had flared when Lucy – who suffers from degenerative eye condition Stargardt Disease – stepped in to ask Booth to leave a staff member alone on September 4 last year.

The yob made a vile sexual comment and then attacked Lucy from behind.

She was rushed to hospital and although she was stitched up by paramedics, she may need plastic surgery to repair the damage.

Lucy said: “It was such a surprise, I’ve never met this man before in my life.”

Booth, who was seven pints and two shots down at the time, was restrained by customers and arrested when police arrived.

He has now been jailed for six years after admitting GBH with intent.

Speaking after his sentencing at Ipswich Crown Court on Friday, Lucy said: “To see a scumbag like this rotting away will do all women who have been attacked justice as well.

“A man like that usually has narcissistic traits, to stand up against him and show him his actions have consequences was important.”

Recorder William Clegg QC slammed the 29-year-old as he sent him down for six years, saying it had been a “dreadful” attack on a “wholly innocent lady”.

“You scarred her for life, picking up a glass and forcing it into her face with such force that it shattered, ” he said.

Shade Abiodun, mitigating, said Booth, who had no previous convictions, regretted his actions.

She added: “He is very sorry for his actions, very remorseful.

“You will see he’s not violent, the offence was and is a one-off incident.” 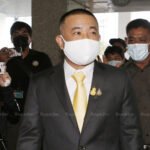