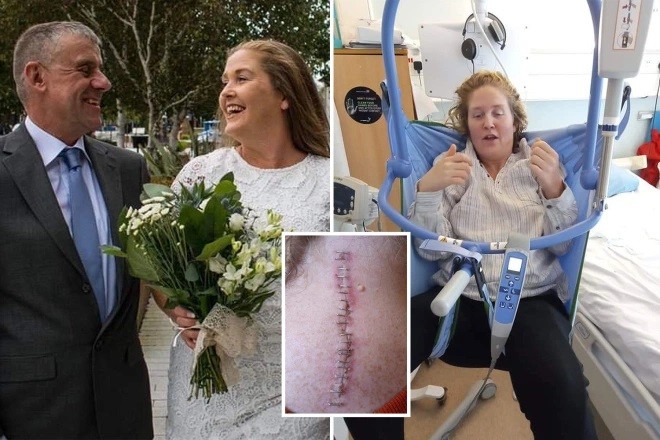 A MUM was left paralysed after falling out the bed while trying to wake her husband for sex.

Sophie Rodgers, 44, said she was “bunny hopping” around her husband Guy Rodgers, 53, but “misjudged” a jump.

The former supervisor for the National Trust, who had failed to rouse her husband, tumbled out of the bed and fell unconscious.

She was found by Guy in the early hours of the morning, unable to move her limbs.

When she was taken to the intensive care unit and the specialist spinal unit, Sophie was delivered the devastating news she was unlikely to walk again.

She had suffered a spinal cord injury across several vertebrae at the top of her spine.

A diagnosis of a C4 to C7 spinal injury can lead to paralysis in the limbs, an inability to control bladder and bowel movements or even inability to speak and breathe without help.

Because Sophie’s injury is “incomplete” it means she has some sensation and movement below the injury, as opposed to none at all.

Two years after the incident, which required three operations including to fit titanium rods in her neck, Sophie can walk short distances with a walker and takes a wheelchair out and about.

She is able to use her arms and upper body a little, but can’t lift heavy items, for example.

“It’s just affected everything. Even cuddles in bed are difficult because there are patches of skin on my back and when something touches them it feels like they are burning.

“The worst thing is I’m stuck indoors and I’ve got no control over anything at the moment.”

Speaking of the incident, Sophie said: “I was mucking about and bunny hopping over my husband on my hands and knees and just being a wally messing in bed as you do.

Sophie said her husband only spoke to say “get off” because his job required getting up at 4am.

It was the most pain I’ve ever experienced. I’ve had three children without any drugsSophie Rodgers

“He’d rolled over and gone back to sleep and I sort of jumped back over to my side and I just missed.

“In hindsight I think I must have knocked myself out and I remember waking up and I thought my legs were really cold and I couldn’t move them.

“I was trying to pull myself up on the bed… Then I must have fallen and lost consciousness again or fallen asleep.

“My husband woke up at about 2.30am for his usual toilet break and he saw me on the floor and said ‘what are you doing down there?’.

“I said I’d fallen out of bed and I got so cold I can’t bloody move anything, I can’t even get up.

“I was a dead weight and he picked me up and put me to bed and then he went to the toilet and got back into bed and thought nothing of it, and we fell asleep.

“In the morning he woke up and was getting dressed and he said ‘come on, you’re going to be late for work’ and I just couldn’t move anything.”

The couple, who had just celebrated their first wedding anniversary after getting married four months after knowing each other, rushed to James Cook University Hospital, Middlesbrough.

Sophie said: “I remember them saying I will probably never walk again but they’ll work hard to try and get movement from my waist up back.

“Your brain’s got a way of protecting you from things and I think it shut some parts off so you can deal with the important things. It’s that fight or flight instinct.”

The mum-of-three said she was in so much agony it felt like a “hot poker” touching her.

“It was the most pain I’ve ever experienced. I’ve had three children without any drugs or anything.

“I can just imagine that’s what it’s like being burnt alive, it was absolutely horrendous.”

Sophie spent three months in hospital where she had physio and an occupational therapist once a day, but “begged” for more sessions to help speed up her progress.

The gravitas of her diagnosis only hit home just three or four weeks before she was discharged in November 2019, when Sophie said she “cried for about five days”.

What injury does Sophie have?

It often causes permanent changes in strength, sensation and other body functions below the site of the injury.

The ability to control limbs depends on where the injury was, and how severe.

A traumatic spinal cord injury may stem from a sudden, traumatic blow to the spine that fractures, dislocates, crushes or compresses one or more of your vertebrae.

Common causes include a car accident, fall, violence and sports, while alcohol is inolved in one in four cases.

It may also result from a gunshot or knife wound that cuts the spinal cord.

A nontraumatic spinal cord injury may be caused by arthritis, cancer, inflammation, infections or disk degeneration of the spine.

She said: “It’s bizarre because everything changes about you – it’s not just the fact that you can’t walk anymore and the fact that you’re dragging your feet on the floor and all the rest of it, your whole stance is different.

“I don’t even look the same when I look in the mirror – my body shape has totally changed.

“I used to have quite a nice cute little bum and a nice little wiggle – that’s gone.

“I don’t look the same and I hate looking in the mirror now, I can’t stand it. You’re just not the same, it’s just awful.”

However in May 2021, she had to have a stoma fitted because the nerve damage from her accident means she has incontinence.

Sophie said: “Two years in, I was doing really well and now I’m starting again but now with a stoma and a bladder that doesn’t want to behave itself, I must admit it’s really got me down.

“I’m basically falling to pieces at the moment but I’ll get there.

“I have to rely on people for absolutely everything. If I have an accident changing my stoma, I can’t clean it up, my poor husband has to do it.”

Sophie has had adaptations to her home such as hand rails to help her climb the stairs, blow up cushion to prevent bed sores and a bath lift.

However she has been unable to go out alone due to fear of getting too tired and being unable to return home.

Now Sophie is fundraising for a £5,000 for a three-wheeled roadworthy scooter and specialist support clothes for stomas to help her “regain her independence”.

“I wanted to try and do something for myself. I know a GoFundMe is getting help from other people and I’m aware of that”, Sophie said.

“Just getting a bit of my life back would mean the absolute world to me.” 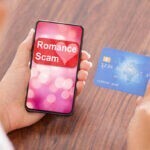 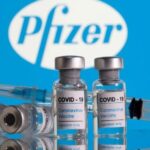