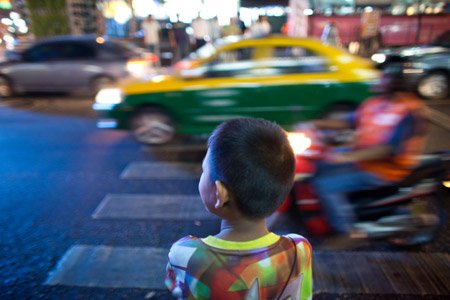 Most evenings, a boy of about 14 years old appears outside a busy 7-Eleven store near Siam Square, a hub of glitzy shopping malls in the Thai capital, Bangkok.

The youth is coated in dirt, his black hair is matted, and his nails have grown claw-like. He wears unwashed shorts, an oversized jersey, and plastic flip-flops. He takes a plastic cup out of his backpack and places it by the door.

As the cup slowly fills up with coins, he sits hunched with his head resting on folded arms between his knees, or sprawls inert on the pavement. He never says a word or even looks at anyone.

The boy appears sleepy or dazed, in a possible sign of substance abuse. He may be mentally impaired.

He has likely been living on the street for months – perhaps years.

“His parents are bad people,” says a woman who hawks fruits from a cart beside the store. “They sell drugs, I think.”

The teenager hails from a notorious inner-city slum and prefers roaming the streets to returning home. “I offered to take him home, but he doesn’t want to go,” says a man who repairs shoes on the pavement. “I feel sorry for him.”

There are scores of other runaways like this youngster around Bangkok according to the Missing Persons Centre of the Mirror Foundation, a Thai non-profit that spearheads efforts to track down missing children and reunite them with their families.

“They’re usually from disadvantaged backgrounds and domestic problems cause them to run away,” says Lakkhana Sirikan, a researcher at the unit.

“Neglect, abuse and domestic violence are the main reasons, but problems at school can also be a factor.”

“There’s been a breakdown of multigenerational family bonds in Bangkok,” says Sombat Boonngamanong, a social activist who runs the Mirror Foundation.

“Children neglected or abused by their parents often don’t have their grandparents or other relatives with them for support. Many poor parents face lots of pressures, and some take it out on their kids.”

Last year, 244 children were reported missing in Thailand, according to the foundation, although many other cases may have gone unreported.

Eighty-five per cent of the children are runaways, the charity says. Most are eventually located and either returned home or taken to an orphanage.

“Some cases are especially sad,” Lakkhana notes. “A 10-year-old girl was reported missing. We found out she’d been abused and exploited at home, kind of like Cinderella,” the researcher says.

“She got on a random bus and stayed on it until the last stop. She wanted to be as far from home as possible.”

The girl is now in an orphanage.

Like most runaways, the youth near Siam Square survives by begging. He does so alongside a wheelchair-bound man with multiple sclerosis, and a heavyset man with a badly dented skull who lives under a stairway.

“Living on the street is hard, but for some kids it’s better than staying at home,” explains Piyabut Phailamun, who used to be one of those children.

A soft-spoken 25-year-old, Piyabut ran away when he was seven and was homeless for 15 years.

Domestic troubles drove him away from his family’s wooden home in a low-income Bangkok shantytown that sprawls along railway tracks.

Piyabut’s father, a bus driver, had several children by two women and his mother didn’t care for the boy, who roomed with his grandmother.

“My grandma made me look after her and didn’t let me go outside,” he recalls. “When I sneaked out to play with other children she beat me.”

One night, fearing he would be punished again for playing outside, Piyabut decided not to return home.

An older boy took him to Sanam Luang, a large grassy field by the Grand Palace in the city’s historic heart that was home to numerous homeless people, including children.

Sanam Luang wasn’t far from his home, but to young Piyabut it felt like a world away. “I liked it there,” he says. “It was a fun place. I had many friends.”

He didn’t lack for much, or so he thought. Vendors gave him food, and with the money he begged he played games in arcades and internet cafes.

Many of his transient benefactors were foreign tourists.

“When you’re a child it’s easy to beg because people take pity on you,” Piyabut says. “The police didn’t pay attention to us.”

He bathed in the nearby Chao Phraya River and slept on the grass or pavement. If he had money to spare, he rented a mattress with pillows for the night from an enterprising local. When the rains came, he sheltered under bridges or the eaves of houses.

Piyabut scavenged in rubbish bins and helped Buddhist monks with their alms rounds in return for leftovers.

“I wasn’t homesick because I didn’t have good memories of my home,” Piyabut says. “I enjoyed doing whatever I wanted.”

The longer runaways stay on their own, the worse their prospects get. Some become aggressive and violent. Some become druggies or alcoholics. Some go into the sex tradeSombat Boonngamanong, the Mirror Foundation

Yet it wasn’t all fun and games on the street. Some homeless boys were lured into selling
methamphetamine pills, known as yaba (“crazy medicine”). Other youngsters began shoplifting, stealing and committing other crimes. Sexual abuse and exploitation were constant threats.

Like many stray children, Piyabut didn’t go to school, so he cannot read or write. Until recently he didn’t know his own name and went only by “Um”, his nickname.

“The longer runaways stay on their own, the worse their prospects get,” says the Mirror Foundation’s Sombat, 51, a high-school dropout who has been running various humanitarian projects for nearly 30 years.

“Some become aggressive and violent. Some become druggies or alcoholics. Some go into the sex trade,” he adds.

Yet, even after decades on the street, some runaways do beat the odds.

Ae doesn’t know his real name, either, or even the year of his birth. An amiable fellow in his 40s with a wispy goatee and a bad limp from gout, he was abandoned as a baby into the care of monks at a provincial Buddhist temple. “My parents didn’t want me,” he says.

He was bullied by other boys so ran away when he was seven or eight. “I wasn’t afraid to be on my own,” he recalls. “I looked for food in the garbage and asked strangers for help.”

He ended up at Sanam Luang, where he begged and sold newspapers, though he couldn’t read. He revelled in the frequent outdoor festivities at the site, with live music, movie showings and free food. Ae still loves public gatherings.

His closest call came when he was tricked into joining the crew of a fishing boat. He was forced to slave away for months at sea with no pay.

“It was very hard work,” he says. “If you resisted, they could push you overboard and no one would know.”

Ae managed to escape. He now lives in a small rented room and helps other homeless people as a social worker for the Mirror Foundation. At Christmas, he dressed up as Santa and walked the streets, handing out gifts to vagrants.

“Ae is an exception. Many homeless people don’t make it,” Sombat says. “He’s lucky he hasn’t gone to the dark side by doing bad things.”

“I’ve had a hard life,” Ae concedes. “Many of my friends have died.”

Piyabut, too, has beaten the odds. Three years ago, he came down with tuberculosis, which went untreated because he didn’t have money or even an identity card needed for government-provided health care.

“I thought I was going to die. I wanted to go home,” Piyabut says. “But I didn’t know the address or even the location. All I remembered was a wooden house by railway tracks.”

Thanks to a kindhearted doctor who treated him for free, Piyabut recovered and began looking for his family’s house. After searching for weeks with help from the foundation’s staff, he finally located it. 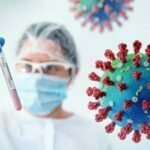 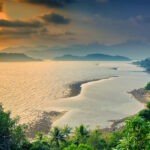