A famous Thai university lecturer and a “high-society” man have been arrested for allegedly buying sex services from males under 18, a source at the Royal Thai Police’s Anti Trafficking in Persons Division (ATPD) said on Wednesday.

A police probe concluded that the two men – who say they are innocent – were among some 200 members of a Line group chat targeting those who wanted sex with boys and would buy sex services arranged by a middleman who also worked as a convenience store employee.

Following their investigation that confirmed that boys were being solicited, APTD officers applied for arrest warrants for 6-7 suspects, including someone the police are labelling a “high-society” man, over charges of allegedly buying sex services from males under 18.

The university lecturer was allegedly later implicated as a customer, leading to issuance of an arrest warrant and his arrest on Wednesday.

ATPD officers are to host a press conference on Thursday to discuss both arrests at its head office in the government complex on Chaeng Wattana Road. 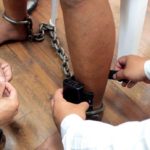