At least one of the bad guys was wounded, but all eluded capture.

The police had to settle for a haul of 4.4 million methamphetamine pills and 97 kilograms of crystal meth

The 30-minute gun battle took place at a checkpoint on Ban Doi Laem-Ban Tad Mok Road in Mae Ai district. Police had been tipped off about a drug shipment coming through.

Three suspects in a pickup truck opened fire in a bid to force their way through the police blockade.

After an exchange of fire, the suspects abandoned their vehicle and fled into a forest.

Police found traces of blood around the pickup and the drugs under canvas in the back. 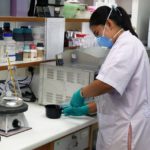