A robber was in the process of robbing a hot dog stand in the Far South Side, Chicago, when he discharged his weapon on himself, The Chicago Tribune reports. The infamous incident was reported in November of 2017.

To add a flare of poetic justice to the yarn, the hot dog stand robber shot himself in the penis, citing The Sacramento Bee.

He thought he was going in for some quick cash. The suspect entered a restaurant with a loaded firearm looking to score easy money and maybe some free food.

This took place at the hot dog stand on the restaurant area Maxwell Street Express. The Chicago Sun-Times identified the culprit as Terrion Pouncy, age then 19 years. The teen approached the hot dog stand and demanded cash.

When he went to adjust the .38 pistol he had brought along, he shot himself twice. Once to his penis and once to his leg.

This took place Tuesday morning, the week of November 3, which would have made the actual day of the crime Halloween 2017, citing The Sacramento Bee.

Pouncy remained hospitalized on All Souls Day, November 2, 2017. He, therefore, missed his first court appearance for good measure. This according to The Sacramento Bee who was citing The Chicago Tribune.

Pouncy faced two counts of robbery for taking items from the two employees of the hot dog stand. These included their cell phones and their wallets.

He also did manage to steal some of the cash from the business. Too bad that he had medical bills and court fees to cover after that.

The Daily Mail UK followed up and stated that the weapon discharged when Pouncy was adjusting it in the waistband of his pants. He put the gun in his waistband and ran from the scene. The story was confirmed to The Daily Mail by Assistant Cook County State’s Attorney Erin Attonietti.

The Daily Mail went on to say that the two hot dog stand employees were men ages then 39 and 45. Pouncy held the pistol to the head of the 39-year-old.

The 39-year-old was holding a grease bucket at the time he was attacked. He asked the other employee to get the cash from the register to give to Pouncy. As the two men handed over the cash and their wallets, the grease bucket allegedly went flying.

Pouncy stuck the money and the gun in the waistband of his bands. He then began to flee the scene. As he did, he immediately slipped in the grease. The firearm discharged, shooting his penis and leg. He ran a few blocks before he called the police to report that he had been shot. The police arrested him at the hospital. Surveillance footage that saw his boxers matched the boxers that were found on him at the hospital.

On the upside, police were able to recover the stolen wallets and the .38 caliber Pouncy shot himself with. 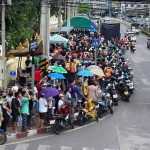