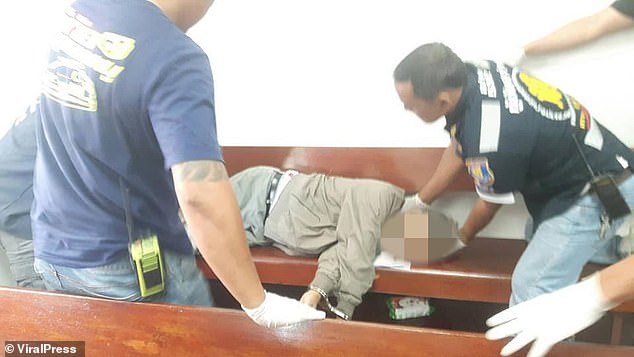 Three people died in a courtroom gun battle in Thailand yesterday after the defendant pulled out a handgun as he waited for the verdict in a land dispute.

Retired policeman Thanin Chantratip shot dead the plaintiff and his lawyer before he himself was killed by police.

Wijai was killed and his client Bancha Porameesanaporn was later pronounced dead in hospital.

A court policeman returned fire in the melee and shot Thanin, who also later died in hospital.

Carnage: People attend to one of the victims’ bodies after a defendant pulled a Glock .22 handgun from his waist following an argument with an opposing lawyer

Two others, including the claimant’s wife Supaporn, are in critical conditions after the gun battle in Chanthaburi this morning.

Onlookers said Thanin and Wijai had started arguing after they arrived at court this morning to hear the verdict.

The land dispute had been running for more than 10 years.

Police major general Charan Jitchuejun, deputy commander of Chanthaburi police, said an investigation had been opened into the shooting.

He added: ‘We are sure that the culprit is Mr Thanin Chantratip and that the victim was his rival in court.

‘The injured parties were the wife of the victim and two other lawyers.

‘The cause of the dispute is a civil lawsuit relating to land which has been going on for more than 10 years.

‘Three people are dead and currently, two are injured from gunshot wounds.’ 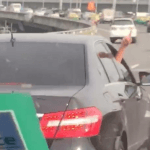 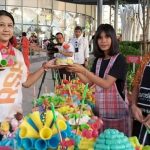 Fined girl sells Bt16,000 worth of krathongs in an hour