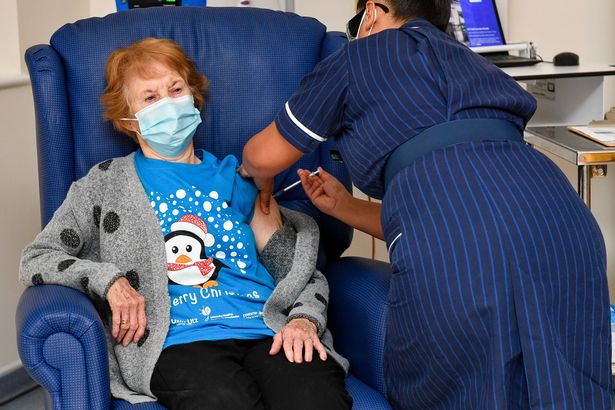 Margaret Keenan, from Coventry England, said she felt “privileged” as she received the jab following its clinical approval as the NHS launched its biggest ever vaccine campaign on Tuesday

Margaret Keenan received the jab following its clinical approval as the NHS launched its biggest ever vaccine campaign today.

Health Secretary Matt Hancock said he felt “emotional” as he saw the image of Mrs Keenan being vaccinated.

Like many around the country, the gran has been self-isolating for most of this year and is planning on having a very small family “bubble” Christmas to keep safe.

She will receive a booster jab in 21 days to ensure she has the best chance of being protected against the virus.

Mrs Keenan, who is from Coventry and will be 91 next week, said: “I feel so privileged to be the first person vaccinated against Covid-19, it’s the best early birthday present I could wish for because it means I can finally look forward to spending time with my family and friends in the New Year after being on my own for most of the year.”

Mrs Keenan, known to family and friends as Maggie, received the jab at 6.31am from nurse May Parsons at her local hospital in Coventry.

Originally from Enniskillen, Northern Ireland, she has lived in Coventry for more than 60 years.

The retired jewellery shop assistant, who was given the jab by nurse May Parsons at her local hospital, added: “I can’t thank May and the NHS staff enough who have looked after me tremendously, and my advice to anyone offered the vaccine is to take it – if I can have it at 90 then you can have it too.”

Jabs will be administered at dozens of hospital hubs across the country from today – dubbed “V-Day” by Health Secretary Matt Hancock.

Mr Hancock said the start of the roll out of Pfizer’s Covid-19 vaccine meant there was “finally” a “way through” the coronavirus crisis.

“And just watching Margaret there – it seems so simple having a jab in your arm, but that will protect Margaret and it will protect the people around her. 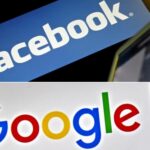 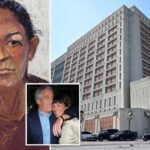