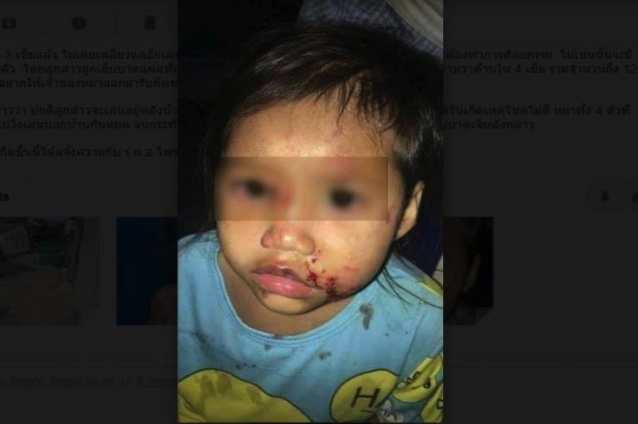 Horrific pictures of a horrible dog attack on a three year old girl have sickened people on the internet.

But now it has emerged that the owner of the dog that left “Nong Cartoon” needing a dozen stitches and emergency surgery has claimed his animal attacked her because she started it.

He told police that she bit the dog, the father has said.

Pictures of Cartoon were posted on Facebook on the page of “Lek Langpetch” following the March 2nd attack.

Father Wanwichai Eung-sawang,27, said his little daughter was playing alone behind their house in Muang district of Chonburi. The family owns several dogs but they were not around when a neighbor’s dog got out and attacked his daughter without warning.She was bitten all over her face and was lucky not to be blinded in her right eye. She needed a total of twelve stitches in three locations on her cheek, around her eye and under her chin. She was seriously bruised around her right eye and rushed to hospital following the attack.

Wanwichai had earlier reported the matter to Chonburi police.

The online community were shocked to hear claims from Wanwichai that the neighbor has subsequently gone to the police himself to counterclaim that the little girl was responsible for biting the dog causing the attack.

Many Thais online were outraged after this latest attack by a dog and the reaction of the owner in the case.

Last week a man in Bung Karn was mauled and killed by three Rottweiler dogs that attacked him when he was out trapping rats in a field. The owner settled the civil case by paying 140,000 baht to the victim’s family. 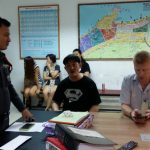 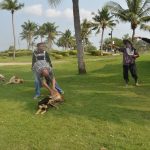