An eight-year-old girl drowned along with a drunk neighbour in a river in Nakhon Ratchasima after the youngster’s father left her under the man’s care while he collected oysters.

The bodies of the girl and the neighbour were retrieved from the Mool Long river, which is a tributary of the Mool River in Ban Khui Village in Tambon Nong Lak of Chum Phuang district early on Thursday.

The girl and her father went to the river bank with two neighbours on Wednesday afternoon to collect oysters.

Since Kongkiart was drunk, the father left him on the river bank and asked him to take care of Chayanut while the father and another neighbour rowed a boat out to the middle of the river to collect oysters.

When they rowed back to the river bank, Kongkiart and the girl were not there. The father found a mobile phone near the river bank and sought help from police and a local foundation to search for the two.

The bodies were sent for autopsy at the district hospital. 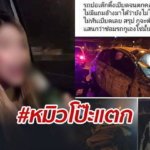 Girl drinks in the car, drives into a river, then tries to blame a rescue car.