Ghost Stories sets out its stall early, and what a bizarre stall it is. At its start, a supposed psychic is on stage acting as a vessel for a dead, leukaemia-stricken child to speak through him: “My blood hurts, Mummy,” the conman wails as the grieving mother breaks down. A couple of minutes later, a few decades earlier, a possessed old woman spits some bile. “She fingered herself last night, thinking about John Travolta,” she says of her adult daughter, demonically. “Daddy sees everything.”

This all makes sense when you know who’s involved. Ghost Stories, adapted from their hit play, is an unholy mind meld of two 51-year-old Englishmen who met at 15 and immediately bonded over their shared love of horror films: Hammer, The Wicker Man, Witchfinder General, as well as scary shaggy dog tales on the BBC and ITV, and John Landis’ just released An American Werewolf In London. Jeremy Dyson went on to co-found and co-write The League Of Gentlemen, while Andy Nyman directed and co-wrote many of Derren Brown’s TV and stage shows. Ghost Stories is unashamedly in thrall to all of this, presenting an anthology about three mentally scarred men (Paul Whitehouse, Alex Lawther and Martin Freeman), tied together by Nyman’s Philip Goodman, a cynical non-believer who hosts the television programme ‘Psychic Cheats’.

The play had audiences screaming and jumping, and the film wants to do the same. It’s a difficult challenge, trying to repeat the effects of a living, breathing interactive experience in cinemas screening a locked product. Spooky and unsettling rather than outright scary, it’s still a funhouse of sorts, prodding nerves from the off with an unhealthy sound mix. There is some very creepy camerawork, and the whole thing feels removed from reality, off kilter and unhappy, filmed in an England with the life sucked out of it.

There is a smallness to these yarns, and, as it is an anthology, it allows only so much emotional investment. You always know some awful thing’s about to strike. But that’s all part of the fun, as Ghost Storiesindulges in tropes, plays with them, sometimes taking the piss out of them: “Fuck that!” yells one character as a beast seductively welcomes him.

It’s at its most effective, though, when it plays it straight. Scares aside, Ghost Stories takes in religion, spirituality and psychological torment, sometimes sadistically. It would be surprising to hear that Nyman and Dyson believed in the supernatural themselves, but they certainly love the idea of it, and this film is an ode to not only horror as a genre, but to real human horror, trauma, and the ruinous damage wreaked by us all. What we’re left with is sadness.

Not quite a terrifying thrill-ride, Ghost Stories is a creepy, disturbing ghost train with a beefier backbone than its source material, trading on tropes but still making your skin itch. 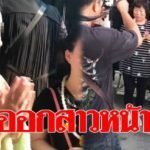