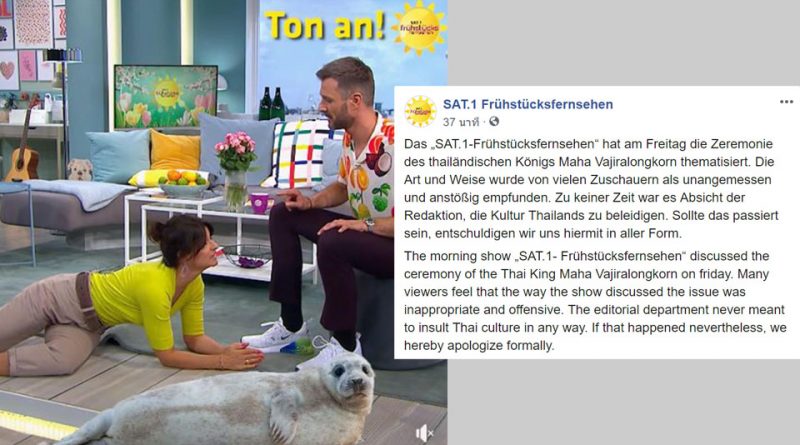 A morning TV show in Germany called “FRÜHSTÜCKSFERNSEHEN” aired news about the Thai King’s Coronation that recently took place, in the show, it looked like the hosts were making fun of the Thai culture and the Coronation Ceremony. The TV show was heavily criticized Online especially on Facebook. The news was sent to the Thai Embassy and the TV show producers have come out to state that they never intended to make fun of the Coronation or to offend any of the Thai people.

The male host of the show named “Jochen Schropp” and the female host “Marlene Lufen” the show was shared online and was heavily criticized by the Thai Netizens. The show aired pictures that seemed as un-appropriate to the current times when the Thai Coronation Ceremony had just taken place.

The official Facebook page of the German morning show was flooded with comments from the Thai Netizens stating how offended and how unhappy they are from the actions of the TV show. The people have seen that the show’s action directly dishonored Thai culture and that such action cannot be tolerated. The Thai Embassy in Berlin the capital city of Germany was notified of the situation, the Embassy confirmed that they have received the complaints and have not remained inactive after the TV show aired. 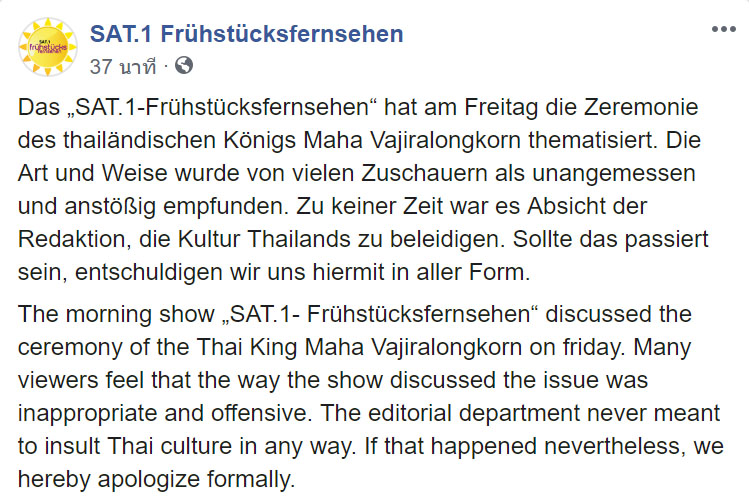 The official Facebook page “SAT.1 Frühstücksfernsehen”  posted on the 7th of this month at 21.29 local Thailand time stated “The morning show,, SAT.1 Frühstücksfernsehen discussed the ceremony of the Thai King Maha Vajiralongkorn on Friday. Many viewers feel that the way the show discussed the issue was inappropriate and offensive. The editorial department never meant to insult Thai culture in any way. If that happened nevertheless, we hereby apologize formally.”.

It currently appears the admin of the “SAT.1 Frühstücksfernsehen” Facebook page has temporarily shut down the Facebook page from the Thai Netizens response to the statement of the TV show. 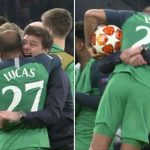