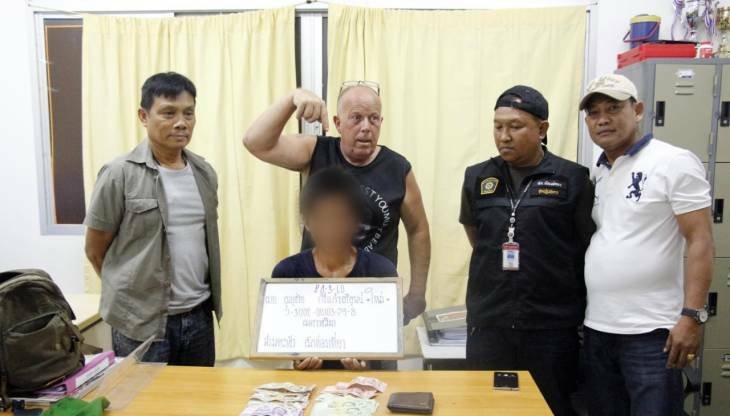 Reports emerged that police arrested a gay pickpocket who had stolen a wallet from a Norwegian tourist on Jomtien Beach yesterday.

A Pattaya police patrol was out trying to find lady boy thieves and other miscreants when they spotted a Thai man looking suspicious and searched him.

He was found to be in possession of a wallet containing almost 6,000 baht belonging to Perens Kisted, 41, who was nearby. The tourist had not even realized he had been the victim of theft.

It was by pure chance that the victim was still around when police were on hand to spot the suspicious activity. The face that he hadn’t even realised that he wallet had been stolen suggest that the pickpocket is no amateur and has probably been operating for a Long time before this particular incident.

The picture shows Mr. Perens in the police station doing a “slam dunk point” on the head of career thief Bunchuay Srikaewboriboon, 29.

Bunchuay, from Korat, claimed that his life was tough and he had only turned to theft to support his younger brother and his wife.

Police soon discovered this was nonsense as Bunchuay had a string of offences for pickpocketing and theft at the resort as well as drugs offences for which he had served time. 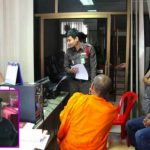 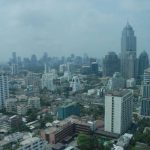