Dozens of French soldiers specialised in firefighting arrived in Sweden early Monday to tackle blazes raging across the country during an extreme heatwave.

Firefighters on Sunday were battling around 50 wildfires after an unprecedented drought in the region and soaring temperatures, which have reached the hightest in a century.

The 30 French soldiers from a Civil Defence unit landed shortly after midnight on Monday (2200 GMT Sunday) in Stockholm, an AFP correspondent said. They will be joined by another 30 firefighters from the south of France on Monday.

France has already sent two Canadair planes to Sweden after authorities asked for EU emergency help to fight the blazes, which have caused no fatalities so far.

Record temperatures above 33 degrees Celsius (90 degrees Fahrenheit) were reported in Uppsala, a city north of Stockholm.

There has been practically no rain since the beginning of May in the country, aside from a paltry 13 millimetres that fell in mid-June.

Denmark, southern Norway and northern Finland are also experiencing a period of extreme heat which, according to weather forecasts, is unlikely to end soon. 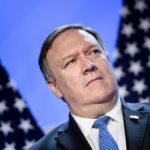 US not ‘afraid to tackle’ Iran regime at ‘highest level’: Pompeo