Yesterday, officers in Queensland, Australia, seized 766kg of MDMA powder, which they believed could have made up to 12 million pills.

The drugs haul had an estimated value of £50.7 million and was the highest purity ever recorded in Queensland.

Footage shows authorities heaving huge sacks of the drugs from a trolley into and storage area, before each one is labelled.

The force arrested two UK citizens in the state, a 51-year-old man and a 40-year-old man, as well as a 26-year-old Australian man.

A 51-year-old Australian woman was also arrested in New South Wales in connection with the seizure of approximately £61,000 in cash.

Two other British men, aged 60 and 49, were arrested by police in New Zealand after 200kg of methamphetamine was seized last week as part of the same operation.

“We believe the drug would have been diluted with other agents and had the potential to make between six and 12 million capsules,” he said.

“Organised crime syndicates are making significant profit at the expense of our Australian community but more importantly they are placing our young people’s health at risk.

“This operation has been focused on targeting and dismantling this organised syndicate.”

The UK’s National Crime Agency was involved in the investigations, alongside police in Australia and New Zealand, the Australian Border Force, the Australian Criminal Intelligence Commission (ACIC) and other agencies.

Dr Katie Willis, from the ACIC, said it was estimated that more than 1.1 tonnes of MDMA is consumed in Australia each year.

“Removing 766kg of MDMA before it reaches our streets will have an immeasurable impact on the illicit MDMA market,” she said. 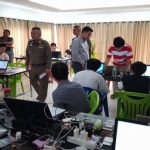 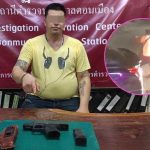 Mark KellyJanuary 26, 2020
There seems to be no end in sight as road digging continues on practically every...
END_OF_DOCUMENT_TOKEN_TO_BE_REPLACED