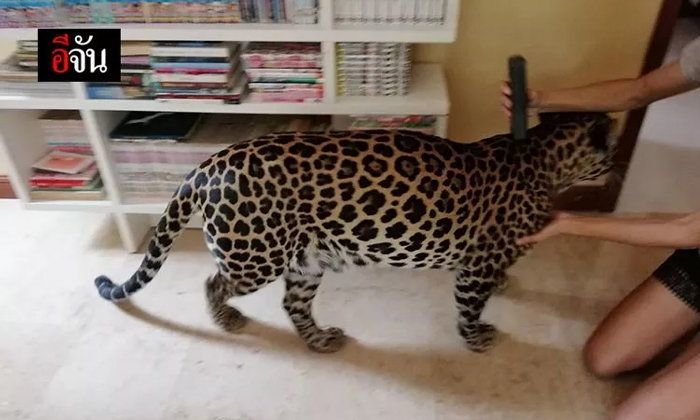 A foreigner has been condemned for keeping a leopard as a pet at a rented house near Pattaya.

A leading animal activist living in Thailand said he is shocked and baffled that the Thai authorities have allowed the man and his Thai wife to keep the leopard at their house in Na Jomtien, Sattahip.

They found a four-year-old fully grown leopard. The house has a cement fence surrounding the property and is topped with a net to the height of 3 meters, said Sanook.

Nitaya said she and her foreign husband had raised “Typhoon” since he was a cub.

She showed documentation to show that the couple had legally bought 3 leopards who had all died. They had two offspring, Thaiphoon and a female called Fah Sai who was sick and in Chiang Mai.

They moved from Chiang Mai to the rented house in Sattahip four or five days ago.

A case brought in November of last year decided that they could keep the pets. But Nitaya and her husband have yet to register the animals with an office in Sri Racha.

They have been ordered to make improvements to the house so that the leopard can’t get out and attack neighbors.

Founder of Wildlife Friends foundation Thailand Edwin Wiek from the Netherlands who runs a sanctuary in Petchaburi province slammed the couple saying he was shocked.

He said “I am baffled that they are allowed to keep these two leopards given the fact that they did not register the last 2 properly in Chonburi, moved one from Chiang Mai without any permission and that they keep this one in an insecure environment”.

He described the garden as insecure with a thin fishing net as a fence.

He continued: “They are not allowed to move it and need to upgrade the quality of the enclosure. The leopard can never be used for conservation or anything else given it has been with people for a long time, but it is still a potentially very dangerous species”. 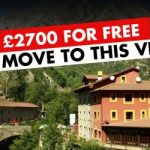 Places in the world that will PAY YOU to live there 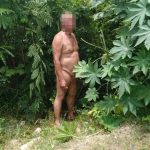 Thai pensioner caught having sex with a cow