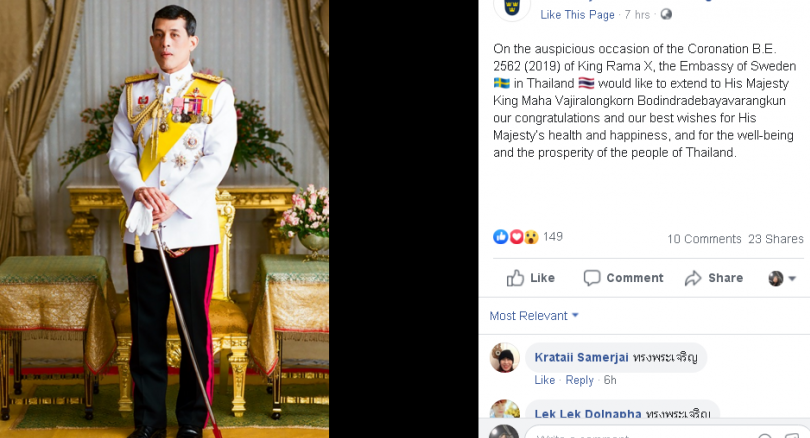 Foreign embassies and missions have offered their congratulations on His Majesty the King’s coronation on Saturday, extending their good wishes to the monarch and looking forward to closer ties between their countries and Thailand under his reign.

Singapore President Halimah Yacob has written a congratulatory letter to His Majesty King Maha Vajiralongkorn on this occasion.

“On behalf of the people of Singapore, I extend my warmest congratulations and best wishes to Your Majesty on the most auspicious occasion of Your Majesty’s Coronation. I am confident that the people of Thailand will continue to see development and abundance in the years ahead under Your Majesty’s reign,” Yacob said in her letter.

A copy of the letter was published on the website of Singapore’s Ministry of Foreign Affairs.

The Singaporean president also said she looked forward to “the further strengthening and deepening of the warm ties between our two countries under Your Majesty’s reign”. She also invited the King to visit Singapore.

The Embassy of the People’s Republic of China on Saturday said that the Chinese diplomats in Thailand were joining Thais in celebrating His Majesty’s coronation.

“May Thailand enjoy stability, peace and prosperity under the reign of His Majesty King Maha Vajiralongkorn Bodindradebayavarangkun. We are confident that thanks to His Majesty’s attention and support, the relations between China and Thailand will progress continuously towards the next steps,” the embassy said.

Meanwhile, the Embassy of Sweden on its Facebook page extended its congratulations and best wishes “for His Majesty’s health and happiness, and for the well-being and the prosperity of the people of Thailand”.

The Embassy of France extended its warmest congratulations to His Majesty on the occasion of his coronation.

“France is very attached to its friendship ties with Thailand, which dates back to the first diplomatic mission of Siam to France in 1686. France is confident that these ties of trust will continue and strengthen under His Majesty’s reign,” the embassy said.

The European Union mission in Thailand also joined others in this occasion. “We respectfully extend our cordial congratulations to His Majesty King Maha Vajiralongkorn Bodindradebayavarangkun on the auspicious occasion of the Royal Coronation,” the EU said.

Also on Saturday, the Restoration Council of the Shan State and its armed wing the Shan State Army (RCSS/SSA) offered their congratulations to King Rama X on his coronation.

In a joint statement, the RCSS/SSA said that Thailand is the only nation-state of the Tai people that still has king as the head of state. “We shall admire this fact highly,” the groups said.

The RCSS/SSA said that they are also Tai people like Thais, and they wish the King to live long and for the prosperity of all the ethnic Tai people. 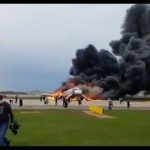 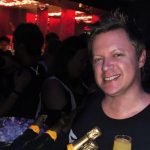