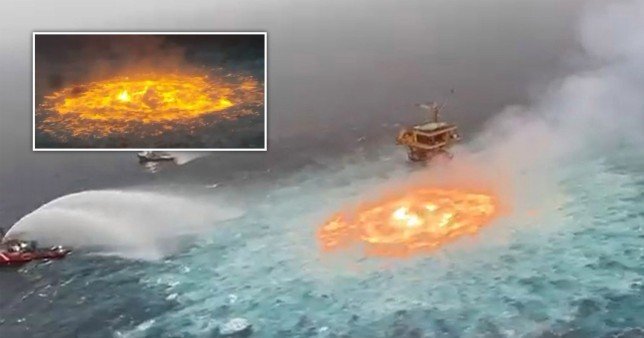 An underwater gas pipeline ruptured and sent a ball of fire to the ocean surface in the Gulf of Mexico.

Bright orange flames resembling molten lava were seen jumping out of the water west of Yucatan peninsula on Friday.

The leak, which around dawn on Friday, occurred about 150 yards from a drilling platform and took five hours to bring under control.

It is unclear how much environmental damage has been caused, but critics said it showed that offshore drilling for oil is ‘dirty and dangerous’.

Pemex said it had dispatched fire control boats to pump more water over the flames and no injuries were reported.

Production from the project was not affected after the gas leak ignited around 5.15am local time, it added.

Angel Carrizales, head of Mexico’s oil safety regulator ASEA, wrote on Twitter that the incident ‘did not generate any spill’.

Mr Carrizales did not explain what was burning on the water’s surface.

An incident report read: ‘The turbomachinery of Ku Maloob Zaap’s active production facilities were affected by an electrical storm and heavy rains.’

These details were not mentioned in Pemex’s statement, Reuters reported.

The company added that it would investigate the cause of the incident.

Pemex produces more than 40% of its 1.7 million barrels of daily crude oil at Ku Maloob Zaap.

The company, also known as Petroleos Mexicanos, has a long record of major industrial accidents at its facilities.

Miyoko Sakashita, oceans programme director for the Center for Biological Diversity, said: ‘The frightening footage of the Gulf of Mexico is showing the world that offshore drilling is dirty and dangerous.

‘These horrific accidents will continue to harm the Gulf if we don’t end offshore drilling once and for all. 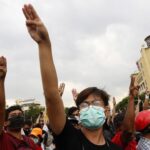 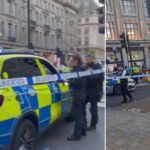 Man, 25, charged with murder after 60-year-old stabbed to death