A woman who was shamed on social media after pictures showed her with a naked three year old boy on a mini motorcycle has been spoken to by the police.

The 23 year old,who was not named, said that she was making a delivery in the area around her home in the southern Thai city.

She had no idea she would end up on social media and she apologized for her actions.

Though Sanook did not report on exactly how much she paid, the fines for those three offences can be as much as 10,000 baht, 1,000 baht and 500 baht respectively.

She was not charged with anything related to the little boy who is one of her relatives. 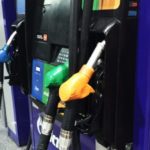