A woman was gored while sitting in the crowd at Thai bullfight after the animal broke into the stands and charged at her.

Khun Nam, 57, required first aid to an inch-long cut on her face after being battered by the bull during a fight in Trang province, southern Thailand, on Monday.

Video captured from the opposite stand shows panicked spectators fleeing after the bull managed to smash through a wooden barrier and into the seating area.

People can be seen climbing up metal poles surrounding the concrete seating area in order to escape the enraged animal. 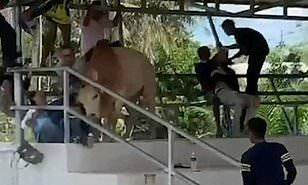 As bullring staff try to corral the creature back into the ring, it sets its sights on Ms Nam before charging at her.

More footage from a different angle shows how the animal drove her into a corner and up against a metal pole, causing the cut.

But she was lucky to escape further injury after the bull’s horns narrowly missed one of her arms and got tangled in her t-shirt instead.

Fortunately for Ms Nam, the bull soon fled out of the stands and into a paddock next to the bullfighting ring, where it was recaptured.

Bullfighting is a growing sport in southern Thailand but is vastly different from its Spanish counterpart.

In Spain, the bullfights with people in a highly stylized display that typically ends with the animal being killed by a matador.

In Thailand, bulls are pitted against one another to see which is stronger. The animals typically survive.

The sport is thought to have started with contests between cattle farmers to see who owns the strongest bull.

However, the contests have now expanded into spectator events and are attracting a growing number of tourists.

Management of the events is still haphazard, with few rules governing safety. 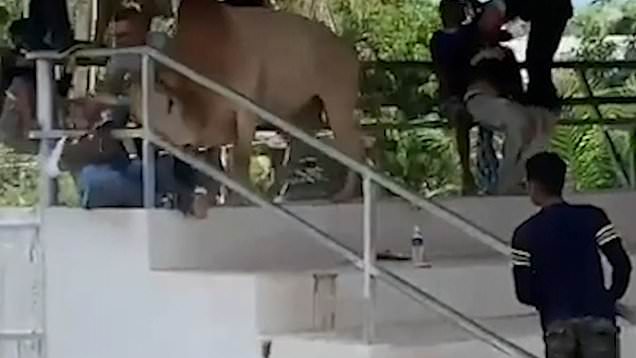 One of the spectators at Monday’s fight – Anutin Wattana – said that people attend bullfights in the region to place bets on which animals will win.

Two bulls manged to escape the ring during Monday’s fight alone, and he has called on the organisers to strengthen the fences to prevent it happening again.

He said: ‘One of the bulls ran away after it broke loose but another one rammed into the audience.

‘Fortunately the woman was only slightly injured but the organisers should really be concerned about the safety.’ 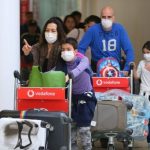 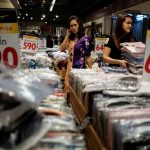