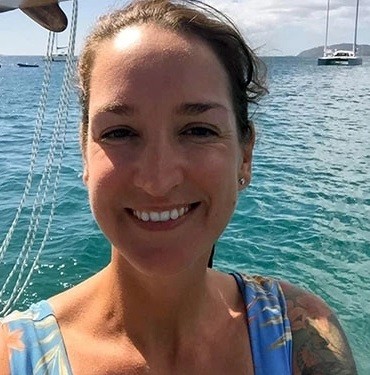 THE FBI is now investigating the disappearance of Brit Sarm Heslop in the US Virgin Islands, The Sun can reveal.

Agents will be interviewing staff at the restaurant where she was last seen alive with boyfriend Ryan Bane, 44, on the island of St John.

The news comes as a pal of the wealthy American said he is “scared” because he doesn’t trust local police where Sarm mysteriously went missing from his catamaran.

She vanished from the £500,000 Siren Song in the middle of the night after the couple returned from dinner at the 420 to Center diner and bar in Cruz Bay on the island of St John.

Mr Bane said he woke at 2am to find Sarm, 41, gone and could find no trace of her before calling cops half an hour later.

But he is refusing to speak formally to police and denying them access to the boat on advice of his lawyer.

A member of the diner’s staff, where Sarm was last seen, told a pal: “The couple were here. But I can’t say anything yet because the FBI want to interview me.”

He said cops from the neighbouring British Virgin Islands are also involved in the investigation and want to chat to restaurant workers.

Charter skipper Mr Bane has been spotted sinking a beer on his boat, moored in the same place in a quiet bay where Sarm vanished 120ft from shore in just 11ft of water.

He is staying there with his dog Hunter as fears grow for his ex-flight attendant girlfriend, from Southampton.

One of his friends in the US Virgin Islands told The Sun: “I have spoken to Ryan and told him he should make a statement and be as cooperative as possible.

“He is scared, he’s totally spun out, particularly when people come pointing fingers at him.”

The friend added: “I don’t see why the police shouldn’t search the boat.

“His concern is that he believes the VI Police Department will not conduct the investigation with clarity.

“He is concerned if something is spun the wrong way that they are going to be looking for something to implicate him as opposed to the other way around.

“If he’s is at fault, I want justice for Sarm. But I find it hard to believe that’s the case. I believe people who do harmful things don’t show grief like he has.”

Bane is not a suspect or person or interest in the investigation because police have not declared a criminal probe.

He is scared, he’s totally spun out, particularly when people come pointing fingers at himFriend Of Ryan Bane

The skipper met experienced sailor Sarm on Tinder in Grenada last year before she went to work at a call centre in Malta.

They conducted a long-distance relationship and then joined her boyfriend to work as a chef on the Siren Song a few weeks before she vanished.

The pal said Bane had relationships with two previous girlfriends who joined him on the boat but they did not work out.

They added: “He’s bereaved. I’ve known him for a long time and I’ve never known him be violent.

“He is not running from anything, he’s just super overwhelmed and looking how to proceed. He’s wondering what’s going to happen.

“In Sarm, he finally thought he had found a woman he could stick with for a while.”

The pal said if Sarm fell overboard in the early hours of March 8 then powerful rip currents could have carried her out to treacherous deep water in minutes.

They said: “The boat is only in around 11ft of water. But there can be terrific rip currents there.

“Then you could get dragged out to Pillsbury Sound, which is a washing machine of currents. It can be wild out there and people can drown in 60 seconds.

“Sarm could easily have fallen overboard in shallow water and rip currents taken her out into much deeper and more turbulent water.”

Police spokesman Toby Derima told The Sun: “We are still trying to convince Mr Bane to talk to police. And we want to search that boat.”

He confirmed Bane and Sarm were seen together at the restaurant.

The pal said the yacht skipper told them he went out in the boat’s dinghy when he realized Sarm was gone “screaming for her, yelling her name”.

He called police at 2.30am from the dinghy and at 11.46am called the US Coast Guard – who launched a fruitless search with divers and a helicopter.

Hours earlier he said Sarm had tied up the dinghy they used to get ashore to the side of the Siren Song after the night out. He said she was not drunk.

The pal spoke out after The Sun revealed Bane was jailed for viciously attacking his ex-wife Corie Stevenson, 43, in 2011.

A police report alleged Bane threw Corie to the floor, smashing her head against it, after the couple returned to their home in Lake Orion, near Detroit, from a party. 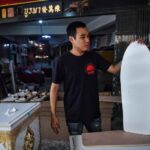 Ashes to Ashes ,Dust to skateboards 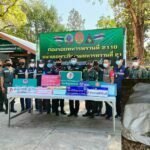