The 79-year-old Nygard was arrested in his native Canada at the end of last year after the US authorities accused him of sex trafficking after he allegedly abused girls as young as 14.

The mogul – who has a net worth of around £700million – strongly denies all the allegations against him.

The new video is part of hours of behind-the-scenes footage, taken over three years, that has been released by Nygard’s former personal videographer Stephen Feralio.

It shows Nygard’s alleged predatory behaviour, including trying to recruit girls as young as 16 to be his ‘girlfriends’.

Feralio told CBC News that one day he filmed a party on the plane that included the 17-year-old dancing along with several other young women.

He said the girls were “all dancing on the stripper pole on the plane”.

Exclusive pictures obtained by The Sun Online show the stripper pole and the lavish mirrored interior of the jet which is plastered with Nygard’s face and name.

Decadent photos show inside the luxurious aircraft which is plated with mirrored ceilings and neon lights.

Feralio revealed how he would be given the signal to stop filming as Nygard chose two or three girls to go up to his bedroom.

His footage documents the many interactions between Nygard and his “girlfriends” who he says “were around when Nygard needed sex”.

“They would accompany Nygard to dinner. They would be parading in during the meetings. Nygard would call them the girlfriends.

The videos he has released also document what Nygard called pamper parties, which he would host every Sunday in the Bahamas or Los Angeles.

Young women and girls were invited for what Nygard said was a day involving fun on the beach, food and dancing.

“Nygard would just come down and choose a girl. Usually they would be drunk,” said Feralio.

“He would be grabbing them, dancing with them. And then at the end of the night, he would give me the signal and that meant stop filming.

“And he would go upstairs to the room sometimes with two or three or more girls.”

Feralio also said he was also filming when Nygard singled out a 16-year-old runner at the 2012 London Olympics as a target, telling another woman he was traveling with to get the girl’s number 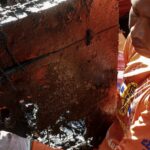 Apichai Ongwisit, aka ‘Ice Metal Casket’ gets life for murder