A family has been left in limbo in Thailand after airport authorities refused to accept their 13-year-old son’s British passport. Kenny Orr, 64, flew out to Thailand with wife Aew, 51, and son Max for a family holiday in his wife’s native country.

After four weeks in Asia the family returned to Bangkok Airport on July 26 where they were due to begin their journey back to Scotland. When checking in they were stopped by airport staff who recognised Max’s Thai passport had expired during their stay. The Craigmount High School pupil, who has dual  citizenship, then handed over his valid British passport but staff wouldn’t budge due to him not entering the country with that document. That meant that the teenager is forbidden from leaving Thailand until his Thai passport can be renewed. The family has been trapped in Thailand for more than a week and now faces forking out more than £2,000 in travel and accommodation. A family friend has flown over their birth certificates to enable Max to apply for an ID, which could take up to a month, before he can apply for a new Thai passport. Kenny said: “We went into check-in and were told Max’s Thai passport had expired. We thought he’d be able to use his British passport but the airport staff said it wasn’t possible. I was thinking about going back but the new documents needed both parents’ signatures. “We needed birth certificates which were in Edinburgh so someone at home knew a friend who was fortunately flying to Bangkok so we asked them to bring our documents over and Aew met them at the airport. “This has been a nightmare. It has not felt like an extended break, more like a house arrest.” Kenny has been fined for overstaying his month-long visa because of the ordeal and has had to pay for an extension – costing around £100. Kenny and Aew have both had to grovel to their bosses for an extended holiday from their jobs as a janitor at Clermiston Primary and a carer at NHS Lothian respectively, and still do not know when they will be allowed to return home. The family, from Corstorphine, have gone back to their property in the meantime in Ubon Ratchathan which is a nine-hour drive from Bangkok. Kenny has spoken to the Foreign and Commonwealth Office who he claims dismissed Max’s case due to him being of dual citizenship. A Home Office spokesman told the Evening News that these incidents are “not uncommon” in the UK and said the passenger would be able to travel with a valid alternative passport. However Max’s case is under the jurisdiction of the Thai authorities. Kenny added: “It’s total bureaucracy. When we entered Thailand we should have been warned about the passport expiring. Max is ready to come home and see his friends. “After having a great holiday, the whole thing now just feels like an anticlimax.” 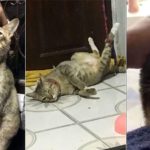