Here’s another example of Thai social media working its magic. After the sad story of an elderly tuk tuk driver and his 10-year-old son went viral last week, people all over Thailand have donated over THB1.3 million about ($US415,700) to help bring the southern family a better life.

For four months, Rungroj Thipparat, 62, and his son, Kampanat, had to sleep in their rented tuk tuk (sometimes called a songthaew in Bangkok), shower at gas stations, and feed themselves on leftovers from a temple.

Every day, Rungroj drove around Hat Yai area in Songkhla province giving rides and earned around THB200 – THB300 ($US6 – 9) daily, but had to deduct THB120 (US$4) rent for the tuk tuk. Due to these monetary circumstances, the family could no longer afford to keep their home.

Meanwhile, Kampanat, a second grader at a government school, woke up early to help monks at their local temple with morning alms, where he got food.

When asked by reporters what he wanted most for Children’s Day, Kampanat asked for simple things most little boys have — a bicycle and a cool Superman costume.

Rungroj said his wife left him when their boy was three years old, and he’d never heard from her since, Naewna reported.

The father said that he felt sorry that he couldn’t give his son a normal childhood, since they only own a few pieces of clothing and cannot afford toys.

Yesterday, a learning center in the province held a press conference to reveal that Rungroj has received over THB1.35 million in donations to his bank account after local media published his story.

One person even left a piece of land in Bangklam District to the family so they may finally build and own a home.

Rungruj spoke in tears, “I have nothing to give you but my thanks. I promise I’ll be a good person as a way to repay your kindness.”

The father and son have reportedly moved into at a rental home in Hat Yai, which is paid for by a local businessman.

They said the money would be used towards their housing and tuition for Kampanat, who dreams of being a policeman when he grows up. 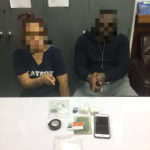 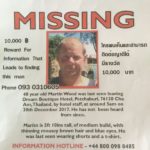