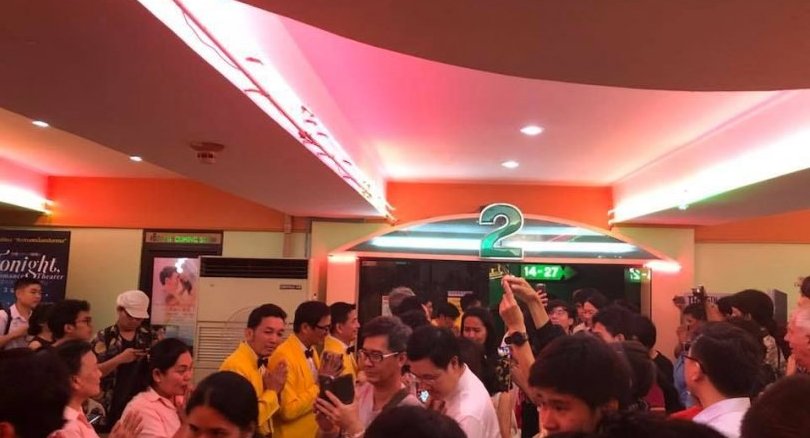 Tickets for all shows were sold out by midday of the cult cinema’s final curtain.

Even the popcorn was sold out before the last show began.

Fans unable to grab tickets snapped the last photos and selfies, freezing their last moments at their beloved moviehouse. Inside, boards were plastered with colourful notes reflecting the emotional connection among many filmgoers, including “Thank you for screening quality films … we’ll miss you” and “Goodbye my friend, Lido”.

It was a memorable night for film lovers from different generations. I was among the audience of 270 who savoured the last screening at 8.30pm – silent films from the early years of filmmaking that highlighted cinema culture and its value, and were accompanied by live piano.

The final screening, the closing film in the fifth edition of the Silent Film Festival, was a special treat organised by the Film Archive as a fond farewell for this pioneer art house.

It featured the 1926 US Shortfilm, “45 Minutes from Hollywood” and the newly restored 1924 US feature “Sherlock Jr”. The comedic silent films were even more fun with the lively synchronized piano by Richard Siedhoff.

The hour-long delight ended with loud applause as the big screen turned white and the light broke the darkness.

The spotlight then turned to the guys behind the projector room, who also were honoured with loud audience applause, and returned the respect with wais to the audience. Fans captured the moments with snapshots.

Stepping out of the cinema, the audience appeared surprise as the dozens of members of the theatre’s team greeted them. Led by the owners of Apex Cinema, the crew in typical – men in yellow suits and women in pink – offered their thank-yous and goodbyes with warm and respectful “wai” gestures.

As my eyes watered, a staff member in her official pink touched my hand and suggested I meet them again at the Scala, the sister cinema run by Apex and now the only surviving stand-alone cinema in the heart of Bangkok.

The Lido’s landlord – Chulalongkorn University’s property management office – later confirmed the impending demise of the building in a Facebook post, but were ambiguous about the planned fate of neighbouring Scala Theatre.

The property office wrote that it aimed to develop the land and would therefore be ending Lido’s lease by May.

The Film Archive is joining with urban conservationists, architects and cinema lovers in a campaign to save the Scala.