Facebook CEO plans to visit Thailand is no longer confirmed

SOCIAL MEDIA giant Facebook has brushed aside any suggestion that its co-founder and major shareholder, Mark Zuckerberg, plans to visit Thailand later this month.

In a statement issued yesterday, a Facebook spokesperson said: “There are no plans currently for any of our senior leaders to visit Thailand.” Earlier, it was reported in Thai media that Zuckerberg would hold a meeting with Prime Minister Prayut Chan-o-cha during a visit to Bangkok on October 30. Deputy Government Spokesperson Lt-General Werachon Sukondhapatipak declined to comment on the Facebook statement, saying that deputy premier Somkid Jatusripitak’s team should clarify the matter. Somkid and his aides could not be reached for clarification yesterday. Zuckerberg was earlier expected to hold discussions with Prayut on issues regarding the use of social media as well as digital business opportunities resulting from the widespread use of social media platforms, especially Facebook.

The Thai government invited Zuckerberg to visit the Kingdom when Deputy PM Prajin Juntong met with the Facebook co-founder during the Asia Pacific Economic Cooperation Summit in Peru last November. At that time, Zuckerberg had said he would be pleased to come to the Kingdom. Prior to Prajin’s meeting with Zuckerberg, Facebook said in a statement: “We have never provided account information or content of any Facebook user to the government of Thailand, nor do we proactively monitor people’s content or conversations for potential violations of local law. “We apply a strict legal process to any government request for data or content restrictions and we list the requests we are getting and any content restrictions made in our Government Requests Report.

“Our policies and process for government requests have not changed, and are consistent for governments around the world. Our meeting with the Thai government was to outline this process.” Zuckerberg had last visited Thailand in 2010 on a private trip to attend the wedding of Chris Cox, Facebook’s vice president, and his long-time friend. According to data released in April by We Are Social agency, Thailand ranked third in Southeast Asia with 47 million Facebook users nationwide, behind Indonesia and the Philippines with 111 million and 63 million users respectively. Bangkok has the largest number of active Facebook users in the world. Its 30 million active users account for 1.5 percent of almost 2 billion active users worldwide.  Source: Nation 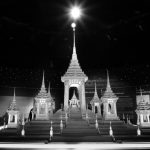 The structure are statues of Heaven built on Earth

Cockroach legs in one of McDonald’s coffee branch, in Thailand