A man, who jumped bail for ID card forgery charges, surrendered to the Crime Suppression Division on Tuesday morning after a police manhunt was launched.

An arrest warrant was issued on November 15 for Nitipong Thawornwiwatanabutr, 37, a resident of Bangkok’s Lad Phrao district.

Nitipong claimed he was able to make fake ID cards by purchasing paper with the Provincial Administration Department’s watermark for Bt40,000 per roll from an agent. He said each roll produced about 200 ID cards, and he charged between Bt5,000 and Bt7,000 per card. The orders were made via Facebook.

He said he has also made fake entrance or recruitment examination cards and that most of his clients were tutors, who worked at tutorial schools opposite Ramkhamhaeng University. Many tutors were also hired by students to take university exams on their behalf.

Police said further investigation will be conducted to nab the tutors who collaborated in cheating. 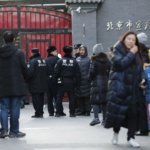