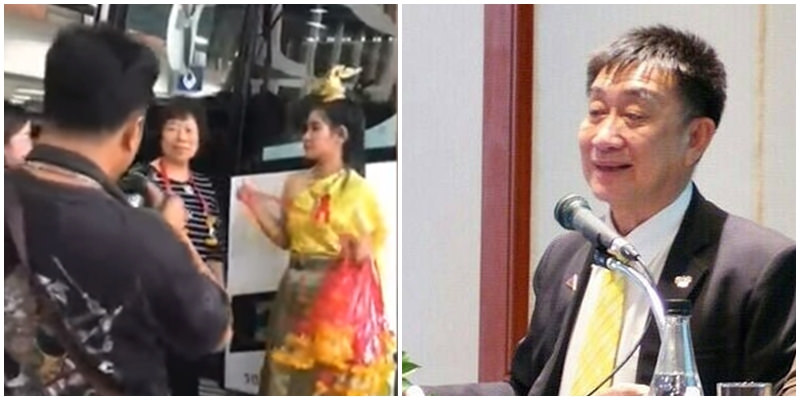 A representative of Employers’ Confederation of Thailand has urged the public to sympathise with the garlands girl being sacked for giving ‘fake smiles’ to Chinese tourists, adding that her employer should be condemned for terrible work environments.
On 9 May 2018, the Tourist Police summoned a tour hostess (name withheld due to privacy concern) and forced her to apologise for damaging the tourism image of Thailand. She appears in the recent viral video clips, which have been widely shared on Thai and Chinese social media.
In the clips, the hostess was handing out flower garlands to Chinese tourists at Don Muang Airport, and giving the camera a rather forced smile. However, the smiles quickly disappear after they send off each tourist onto the bus. Many Chineses have made a parody videos mocking her.
According to Tourist Police Commander Surachet Hakpan, her demeanour spawned parodies on a Chinese video app called Tik Tok, which later were mirrored on Facebook where they reached Thai netizens. In one video, a Chinese woman stood in for the hostess, smiling brightly when the “guest” presented her with some cash. Therefore, the police and her employer agreed to hold a press conference to apologize to the public for her misbehaviour.
“She was lectured, advised and reprimanded. We also told her to apologize,” said Surachet. “Thais must serve as a good host…They have to be kind to visitors.”
The hostess’ boss, Taweesit Chokesermwong, told the media that he has already sacked her and another hostess who appears in the clips, and other staff who were at the incident, including the cameraman, were also suspended for seven days.
According to Coconuts Bangkok, one of the hostess speaking at the press conference said that it was simply a hot day, and they were exhausted from work. And to be fair, traditional Thai dresses are usually made from less-than-breathable fabric. Take it from us, it is the last thing you’d want to wear in the summer heat.
“That day was really hot, and some Chinese tourists mocked me, but I didn’t know that they were taking a video and I’d be widely criticized,” the hostess said, “I feel stressed and sorry because internet users verbally attack me. I’d like to apologise to the society for my inappropriate action,” she said.
While general Thai people were mocking he hostess for lacking service mind, Sopon Pornchokchai, a committee of Employers’ Confederation of Thailand, commented that judging from the viral clips, the hostess was doing a great job because she could smile beautifully in front of the camera, despite her real mood at the moment.
Amid the hot weather of Bangkok, the fact that she has to give garlands to Chinese tourists and smiled for over 2,000 times per day, which is five times per minute, with a very few tips in return, makes her even more pitiful, Sopon said.
In a robot-like job like this, hostesses are paid about 300 baht a day, meaning that they get only 0.15 baht for each garland they hand out. He, therefore, suggested the employer hire more hostess to reduce workloads and increase employee morale.
“Paying around 300 baht to hire one more staff, and to avoid being mocked across the world is extremely worthwhile,” Sopon stated.
Sopon also condemned the hostess’ employer and the police for hosting the press conference and forcing her to apologise for the entire country as if she was a criminal, adding that the one who should be condemned for damaging the image of Thai tourism is the employer himself.
Lastly, he condemned the media for reporting the stories without censoring the hostess’ face because they will make it difficult for her to find a new job.